Athens – An Oasis of Ancient and Modern Marvels 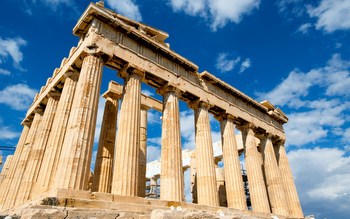 Athens is the capital city of Greece; the cosmopolitan heart of Western culture. This ancient city, which is as old as the Greek myths and legends, is steeped with ancient and modern, nature and civilisation, traditions and trends. 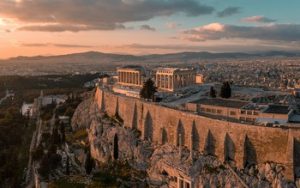 The traffic-filled roads mask cobbled alleys with aesthetic cafes and restaurants with bougainvillaea boughs and serene ambience. The inside of neo-classical buildings thrives with cutting-edge galleries and opulent artistry. Whereas you can spot a few street arts in every other lane, the plainest of entrance ways can lead the view of the magnificent Parthenon twinkling against the night sky.
Athens is the city that stocks hidden surprises at every unassuming lane and corner. The city which has the exotic breath of vast history and rich culture – a hub for all the literary and history fanatics. And it is, for this reason, we have listed a few “places of interest” which will give our readers the thrill to mark this ancient city as their next travel destination.

We wouldn’t be surprised to find out if the Acropolis is the first thing that would pop into your head as soon as you hear the word Athens. ‘Cause same!
The iconic sight – comprised of the Parthenon, the Erechtheon, the Propylaea, and the small temple of Athena Nike – perched on top of a rocky hill for 2,500 years are, without a shadow of a doubt, the most striking set of monuments sprawled against the modern metropolis.
The monuments are universal symbols of classical spirit and civilization – the greatest architectural and artistic complex bequeathed by Greek antiquity. The Parthenon temple, built by Ictinus in the dedication of Goddess Athena, is a perfectly proportioned and considered as the world’s one of the finest Doric masterpieces till date.

While exploring The Acropolis is certainly like entering into ancient Greece, the Acropolis museum is the extended summary of the history of what classical Athens was and what classical culture is.
This popular archaeological museum is located by the South-eastern slope of the Acropolis Hill. The museum was established in 2008 with nearly 4,000 objects are exhibited over an area of 14,000 square metres.

The Philopappos Monument on Mouseion Hill

If you’re one among those who enjoy a rewarding experience of ancient discovery, then this is the place for you. The decorative structure of the Philopappos Monument ornamented with artistic pilasters, Corinthian pillars, reliefs and statues were erected in dedication to Gaius Julius Antiochus, a prince from the kingdom of Commagene.
This ancient Greek site is surrounded by other popular monuments such as the Prison of Socrates; the Tombs of Kimon; the ancient Koili Odos street, which was a mercantile boulevard with both shops and houses; Iroon Mousaiou; and a spectacular view of the Parthenon.

Temple of Zeus at Olympia 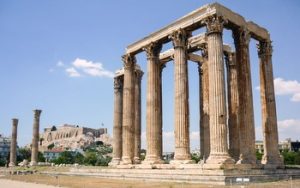 The Temple of Zeus at Olympia, which also goes by the name Olympieion, is a former ancient temple dedicated to Zeus, the King of the Olympian Gods. This colossal temple was built over several centuries starting in 174 BCE under the Syrian King Antiochus IV Epiphanes and finally completed by Roman Emperor Hadrian in 131 CE. Once a grand temple, its glory was short-lived, as it fell into disuse after being pillaged during the barbarian invasions.
It is located in the south-eastern region of Athens’ Acropolis, near the river Ilissos. Its unusually large columns and ambitious layout made the temple one of the largest ever built in the ancient world; and despite it’s few last surviving columns standing tall, the Temple remains a popular site among tourists.

The Museum of Cycladic Art

This lavish museum is dedicated to the study and promotion of ancient cultures of the Aegean islands and Cyprus. It is located at the heart of Athens. Today, it is home to more than 3,000 artefacts of Cycladic, Ancient Greek and Cypriot origin.
The museum with its resplendent beauty is a private living institution full of distinctly shaped slender marble figurines and statues that date back to the Bronze Age. There are even a vast variety of objects, including vases, figurines, and weapons grouped by themes – ‘Gods and Heroes’, ‘Eros’, ‘The World of Women’ and ‘The Underworld’.

Mount Lycabettus is one of the highest peaks in Athens. One can reach the top of it by hiking up a forested slope but, if in case you’re feeling too lazy, there’s a cable car from Kolonaki to the top.
Once you reach the peak, you will find one of the most sweeping views of the city, especially during the mesmerising sunsets of Athens. At the peak, there is also a beautiful whitewashed Chapel of St George, a cafe and Orizontes, a gourmet Greek restaurant with the capital’s most scenic terrace.
Concerts are held at the Lycabettus open-air amphitheatre, built on another part of the hill, in the summertime. 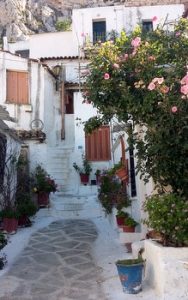 Stretching out under the shadow of the Acropolis, Plaka is one of the world’s oldest continuously inhabited neighbourhoods in Athens.
Step into this picturesque neighbourhoods in Athens and explore the charmingly narrow old lanes, lovely neo-classical architecture with modern graffiti and street art, aesthetic cafes, traditional tavernas and souvenir shops. The beautiful narrow lanes are lined with a hotchpotch of crumbling buildings from various eras, as well as beautiful restored buildings-turned-stately homes. To conclude, Plaka boasts traditional Greek of the 70’s neighbourhood with touristy cliches in its wealth of ancient sites, small museums and historic churches.

The Arch of Hadrian

This Arch of Hadrian, or Hadrian’s Gate, is a triumphal arch which lies right between the rock of the Acropolis and the Temple of Olympian Zeus. The architectural style is very Romanesque with its arches and pilasters of Corinthian rhythm.
Made of Pentelic marble, this arch was constructed to celebrate the arrival of the Roman Emperor Hadrian and to thank him for his benefactions to the city. Symbolically, the location of the arch also marked the line between the ancient part of Athens and Hadrian’s new city. Today, it remains a popular tourist site because of its ancient political history and style.

Situated in the heart of Athens, the National Gardens offer a serene tropical retreat from the bustle of the concrete capital.
The grand park was commissioned by Queen Amalia, the first queen of Greece, in 1838 and completed two years later. The National Gardens cover 16 hectares of narrow gravel paths and ponds with an impressive population of ducks, exotic flora, as well as a small zoo with wild Greek goats, peacocks and chickens. 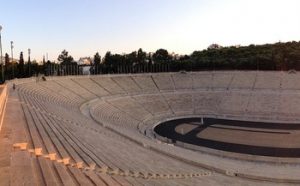 The Panathenaic Stadium is the largest Ancient Athens’ building with a capacity for 60,000 spectators. Constructed around 335 BC, the venue hosted Panathenaic Games where runners competed in races around the track.
The structure that tourists see today is a replica of the original stadium, which is a replica of the original stadium for the Olympic Games of 1896. This modern-era Olympic stadium was created in the identical fashion as the Panathenaic Stadium, with 47 tiers of seating and a rounded southeast end.

If you love history and libraries, then Hadrian’s Library might just be the place for you. It was constructed between 132-134 CE as a part of Roman Emperor Hadrian’s grand rebuilding plan for the city of Athens. It is the largest library in Athens (although it does not lend books). With its columned facade and high surrounding walls, the building was used to store important literary works and legal and administrative documents, as well as offer a place to hear lectures and host various philosophical schools.

The National Museum of Contemporary Art in Athens

Reopened in 2016, the EMST is Athen’s answer to the Tate Modern, Centre Pompidou or the Museum of Modern Art.
This space is filled with art that gets people talking. Expect exhibitions of Greek and international artists across all media, from painting to video to experimental architecture. Here’s a fascinating story about the museum: it is actually a former brewery – Greek beer Fix was once made here. As of early 2019, the museum was closed for renovation.

The Agora’s indoor and outdoor food market delights the senses. Starting in the wee hours, Greek vendors bellow out their best deals in an attempt to sell fresh produce – meat, fish, fruits, spices and products – from around the country.
The atmosphere is unlike any other as travellers and locals traverse the narrow aisles lined with hanging meat carcasses, stalls of Greek deli delights and fresh seafood iced down in vibrant displays.

The Monastiraki neighbourhood is one of the oldest and busiest areas of the capital, packed with rooftop bars, ancient sights and huge markets.
The Monastiraki metro station is right off the picturesque main square, which also has a spectacular view of the Parthenon. Shopping at Monastiraki flea market, squeezing your way through thronging pedestrian alleys, and peruse shops filled with antiques, handmade jewellery and Greek handicrafts.

But with the thrill of creative exploration of alternative culture and attractions, Athens’ energetic food joints are known to make one fall in love with the classical Greek cuisine with modern touches. The Greek love their food as much as we love travelling, and perhaps it is for this reason the city is full of traditional tavernas and trendy restaurants which offer the premier Greek Salad, Saganaki, Baklava, Moussaka, Baklava, Gyro Pita, the traditional strong Greek Coffee, Souvlaki, only to name a few.

Tips and Tours: How to Make the Most of Your Visit to Athens 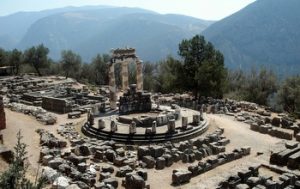 For maximum sightseeing flexibility and value, it’s hard to beat the City Sightseeing Athens Hop-On Hop-Off Tour. Accompanied by an audio commentary, one can cruise around Athens in an open-top double-decker bus to visit the favourite attractions.

If you want to complement their Athens’ tour by historic monuments further, then consider a full-day tour to Delphi. While visiting the Temple of Apollo and the Delphi Archaeological Museum, you can even explore the picturesque towns in Arachova and Levadia.
Taking another Day trip to explore the stunning scenery and hilltop ruins are the highlights of Mycenae and Epidaurus. Drive along Saronic Gulf and into the Peloponnese to the picturesque town of Nafplio.
Poseidon may be the God of Ocean, but not visiting remains of the clifftop Temple of Poseidon at Cape Sounion will be a loss on behalf of those who want to get the ultimate Athens experience.
The rich history of Greece extends far beyond Athens. No matter how much you explore the brightly painted shutters, ancient ruins, medieval monasteries, scenic beaches and varied landscapes, it’s just not enough to fulfil the thirst and thrill of Greece. Our best advice – take your time appreciating the architecture and culture, for Greece is in itself a reminder of time. Giving yourself the time to immerse in its beauty will only conclude to a satisfying experience.