Auli-For The Love Of Skiing 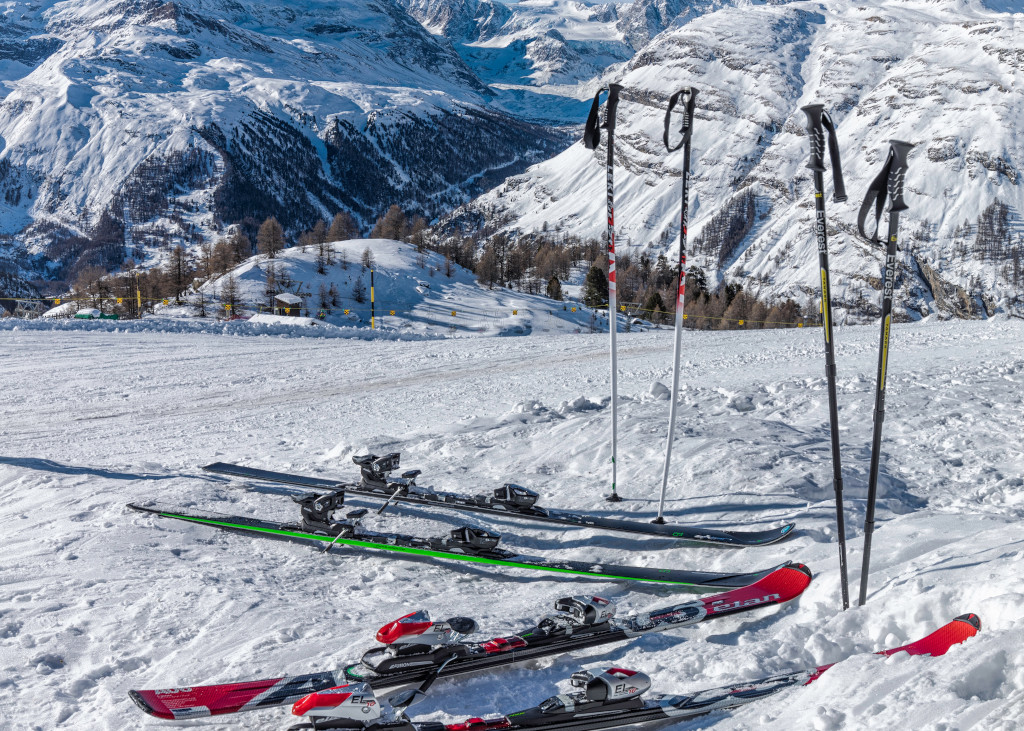 Auli, a small town in the state of Uttarakhand is one of the prime destinations for winter sports. Located close to Rishikesh, it is popular amongst adventure seekers for its pristine skiing slopes. With its ever-improving sports infrastructure, it now boasts Asia’s longest cable car route, a ski lift and a chair lift. Aptly called the haven for skiing, Auli is situated high up on the Garhwal Hills. The slopes are located at an altitude of almost 2500 to 3000 m making it ideal for skiing expeditions. Fairly new in the tourism arena, it is unspoiled and clean.

Though it is most sought out for skiing, Auli also offers other attraction spots to relish the magic of the snow-clad world. Bounded by the snowy peaks of the Himalayas, it provides one with the imposing spectacles of mountain ranges like Nanda Devi, Mana Paravat and Kamat Kamet. With some of the most picturesque views of apple orchards, oak, deodar and coniferous pine forests, Auli holds a prominent spot in the list of the best hill stations in India.

Auli’s history extends to the 8th century when these lands were blessed by the presence of the great Guru Adi Shankaracharya. A temple built by him is located in the nearby town of Joshimath. These lands were also the travelling grounds of the semi-nomadic tribes of the Bhotiyas.

The glittering slopes of Auli have also served as the training grounds for the ski-equipped men of the Indo-Tibetan Border Police Force. The Trishul peak expedition of 1958 is another fun record of Auli’s history. The mountaineers took 4 days to climb the peak and only 90 minutes to ski down to the base camp.

How To Reach Auli?

By Air: The closest airport to Auli is the Jolly Grant Airport in Dehradun, which is about 279 km from Auli. It is a domestic airport that operates daily flights to Delhi, the nearest International Airport.

By Rail: The nearest railheads are in Rishikesh (235 km from Auli), and Haridwar (273 km away from Auli). Trains are available from other major cities in India to these places.

Where To Stay In Auli?

Being a small, high-altitude town, Auli doesn’t offer too many options in accommodations, aside from a few guesthouses and homestays with modern amenities. The skiing resorts of Garhwal Mandal Vikas Nigam (GMVN) are the best options for a comfortable stay. However, the food options are limited and slightly on the higher side due to high transportation costs. But the delicious Garhwali cuisine is worth a try.

Auli is one of those rare places that can be visited during any season of the year – each season carrying a charm of its own. The summers enjoy a pleasant climate, whereas the winters are biting cold, with the whole town wrapped in a thick blanket of snow. Owing to the favourable climate, Auli welcomes visitors of trekking groups, honeymooners, and nature lovers.

The summers in Auli are pleasant, with the average temperature being around 20C. The weather is ideal for trekking and sightseeing between April and June. With the snow receded, the meadows and slopes of Auli turn green and vivid. However, there is snow on the higher hill slopes and is perfect for skiing.

The addition of vibrant-coloured flora and the cool breeze to this adventure spot make it an ideal destination for a vacation.

Auli receives a moderate rainfall in the months of June-September, with the temperature ranging from 10 to 20C. Despite the slippery roads, it is an ideal time for leisurely walks around the hill station. The cable car ride from Joshimath to Auli is very revitalizing during this time, due to the fresh view of the greenery of the surroundings.

To experience skiing at its finest, winters are the most ideal time to visit Auli. Massive crowds of people from India and abroad gather here, between October and March months to experience the rush of zooming down the steep slopes as the cold wind whips by. The surroundings have a fairytale-like appearance with the ranges dusted white, and the peaks looking majestic. The temperature can go down to sub-zero levels, fluctuating between -4 to 7C. The peak season for skiing is in January – March when there are skiing festivals and championships all across the town. Garhwal Mandal Vikas Nigam also conducts 7-day and 15-day courses for both amateurs and advanced learners during this time. Additionally, you can also experience the enchanting Winter Carnival hosted at this time. 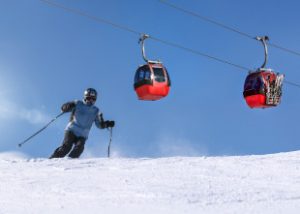 Auli is most known for its majestic skiing slopes and facilities. The skiing grounds are considered one of the best in the world. Skiers are naturally provided with clean stretches of 10-20 km of snow-covered mountain slopes. There is also a descent of 500 m from the ridge over a stretch of 3 km. The forests on the slopes reduce the wind velocity, thus helping the skiers.

Auli often hosts the National Winter Games; an attempt by the Government and local authorities to help the local Garhwali people progress and explore the slopes that rightfully belong to them. However, altitude sickness can be a major setback and should be checked during the fitness tests.

Trekking and Camping In Auli

Trekking and Camping are the most sought out activities in Auli, after skiing. The slopes offer a panoramic view of famous Himalayan peaks, awakening the adventurer in you.

Gurso Bugyal is one of the popular trekking trails. This 3km short trail passes through the valleys between the mountains of Nanda Devi, Trishul and Dron. This region is decked in pine, oak, rhododendron and conifer forests, a feast to the eyes during the spring season. You can also trek towards Chattarkund which is just one km away. Situated 12 km from Gurso Bugyal, Kwani Bugyal is another very popular destination with trekkers.  Camping with bonfires and tents under the stars is a truly unique experience.

The 4km long Cable car ride in Auli is another popular attraction. It is among the longest in Asia running between Joshimath and Auli. At a height of 3010m above sea level, it provides some of the most breathtaking views of the area. The Auli Ropeway operates with a ski lift and a chairlift that rest on 10 steel towers and has 2 cable cars. This ‘Gondola’ presents a mind-numbing view of the snowy valleys, the bright green meadows and the majestic mountain ranges. In the winters, you also get to witness the many skiing events taking place on the slopes, making it a thrilling experience.

Other Major Attractions In Auli

The highest manmade lake in the world, the Auli artificial lake was built with a view of creating perennial artificial ski slopes at this adventure destination. The water from this reservoir is used to fuel the snow guns that have been stationed along the ski slopes. These provide an even surface and extend the season of skiing even if there is less snowfall. Often considered the ‘Switzerland of India’, the lake overlooks the Valley of flowers, with the ranges standing tall in the background.

Located in the Chamoli district of Uttarakhand, Joshimath (also known as Jyotirmath) is one of the closest cities to almost all of the Auli tourist places; It is the beginning point of many Himalayan expeditions such as the trekking trail to Badrinath. It is known for the Shankaracharya Math and Tapovan Natural Hot Springs. Other than its religious significance, Joshimath is also a hotspot for adventurous activities like trekking and camping.

Trishul Peak is formed by three Himalayan Mountain peaks of western Kumaun Range. At a height of 7120m, the Trishul peaks resemble the trident of Lord Shiva, hence deriving the name. These peaks are the grounds for professional skiers and are best viewed from the Roopkund Lake at the base. Jeep Safaris and minibus trips are available to the base camp, where you can start the trek at Trishul peak.

Auli is also the base town to travel to the holy towns of Panch Prayag where the river meets its sister tributaries before transforming into the mighty Ganga River. Vishnuprayag is one of them, where one can see a famous Vishnu temple that was built by the Maharani of Indore back in 1889. Kagbhusandi Lake, with its emerald green water, is in the near vicinity.

Nandaprayag, a hub of spirituality and religion is another one of the Panch Prayag. It is one of the five meeting points of Alaknanda River with other rivulets flowing into it. The town also used to be the capital of the Yadu Kingdom famous for building the Nanda Temple. Rudraprayag, a town lying near River Alakananda and River Mandakini is home to several ancient temples. It also serves as a gateway to two major pilgrimages of Kedarnath and Badrinath.

The Nanda Devi national park is a World UNESCO Heritage Site, situated at a distance of 36 km from Auli. Wide varieties of flora and fauna habituate here, including the widely rare Himalayan wildlife like Snow Leopard, Musk Deer, Wild Boar and Wild Cats.

Enclosed by the Trishul Peaks like a ring, this park has a diverse mix of tall trees like oak, deodar, pine, conifer, rhododendron and many others. IT surrounds the Nanda Devi Peak which is the second-highest mountain in India.

Chenab lake is one of the lesser-explored places of the Gharwal Himalayas. Unexploited by the usual chaos of tourist spots, it is an epitome of serenity, perfect for a family vacation.

The lake has many unexplored corners and a grand view that leaves one mesmerised beyond imagination.

With its snow-dusted alpine forests and glistening mountain slopes, Auli always captures the hearts of anyone who visits this young hill station. For a soulful and beautiful experience, with a dash of an adrenaline rush, Auli is the perfect destination for your next vacation.