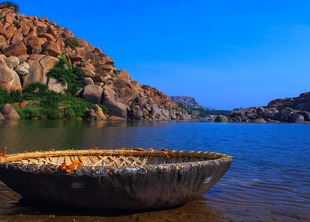 Located in the state of Karnataka, Hampi is a trove of royal, civil and military structures. Bearing the impeccable testimony to the Vijayanagar kingdom, its temple architecture and natural setting come together to make it a must-see place on any traveller’s list. Making this our prime motive, we’ve come forward to bring you the selected places in Hampi that you must visit. 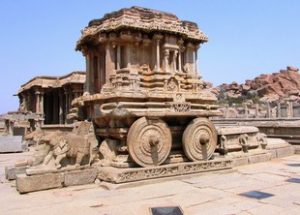 A certain temple that is synonymous with Hampi is the Vittala Temple complex. Built-in the 16th century, the temple is popular for its iconic stone chariot. Though the joints are masked with intricate carvings and other decorative features, the stone chariot looks like it was carved out of a single block of stone. In fact, the wheels were once functional but they are now cemented by the government to avoid any damage. Because it has not been exposed much to natural elements, the undercarriage of the chariot still has paintings that have been well-preserved. The chariot was once topped with a domical structure.

Spreading over a huge area, the main gate of the temple has an impressive arch with carvings and opens in a large courtyard. There are also other smaller temples in the courtyard, all of which worth a visit. The carvings on the walls and pillars of these structures depict various gods in different forms.

A vastly stretched zone, Hemakuta Hill Temple offers an astounding view of the sprawling ruins, temples, and archways. Dedicated to Lord Shiva, it is protected by a fort which provides a secluded atmosphere. This is the best next place to watch the sunrise or sunsets from the top of the slope. The complex remains open throughout the year and entry is free to tourists.

Situated on top of Anjaneya Hill, the temple lies at a distance of 2 km away from the Virupaksha Temple. Also known as the Monkey Temple, the temple is dedicated to Lord Hanuman. Considered a sacred spot for Hindus, the temple is 500 years old.

About 4 km from Hampi village, one has to cross the Tungabhadra river using a small boat with paddles and then climb up the stairs to reach the temple. The serene and picturesque ambience of this temple offers mesmerizing views of sunrise and sunset, making it one of the ideal places to see in Hampi. Within a distance of five minutes from the temple, one can find another temple dedicated to Lord Srinivasa. 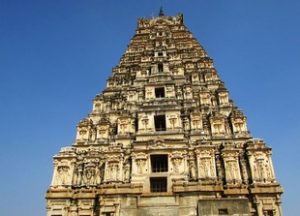 Also known as Prasanna Virupaksha Temple, it is located on the banks of the Tungabhadra river at Hampi. Believed to the oldest functioning temple in India, Sri Virupaksha Temple is a 7th-century temple dedicated to Lord Virupaksha, who is an incarnation of Lord Shiva. Considered an important religious site in Hampi, the temple has been made a UNESCO World Heritage Site for its beautiful architecture and historical significance.

The sprawling campus of the Virupaksha temple has tall towers or gopurams acting as gateways to their inner sanctums. The gopurams lead to several inner corridors and halls, all decorated with intricate stone-work. In a certain part of the temple complex, there is a semi-dark chamber with a small opening. On the wall opposite the opening, you can see an inverted shadow of the main tower of the temple. The sculptures inside the temple depict mythological tales of numerous Hindu Gods and Goddesses. The temple remains significantly less crowded throughout the year except for the months of December and February.

There is an interesting fact which lends the temple its name. This gigantic monolithic statue of Lord Ganesha has its resemblance with that of a mustard seed, which is referred to as Sasivekalu in the regional dialect. Located on the southern foothill of the Hemakuta, it is almost half the size of Kadalekalu Ganesha which is located on the northern slope. Created in the memory of King Narashima II, the statue is over 8 feet tall. Often associated with the legend of Ganesha when he tied a snake around his belly after consuming lots of food, the snake can be seen around Lord Ganesha’s statue. Carved out of boulderstone, the history of the magnificent Pavillion that surrounds the statue of Ganesha dates back to 1506 A.D. And facts like these make this temple an important site to visit in Hampi. 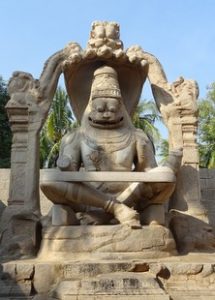 Featuring the biggest effigy in Hampi, this temple displays Ugra Narashima sitting on SeshaNaag i.e. the seven-headed snake. Goddess Lakshmi is seen accompanying Narashima, who is yet another avatar of Lord Vishnu. Thus, lending the temple its name. Built around 1528 A.D, it is a 6.7-metre high statue. The statue of Lord Vishnu and a half-man, half-lion depicts the deity sitting cross-legged in its fierce form. The temple is open to tourists every day from 6 AM to – 6 PM.

Built around 500 years ago, this exquisite structure still remains intact in its construction. A part of the Royal Enclosure, this aquatic enclosure was the royal bathing complex for the erstwhile king and his wives during the times of the Vijayanagara Empire. It’s the simplest exterior perfectly blends with an ornate interior to embrace its overall appearance.

Reckoned as a large bath of Hampi, Queen’s Bath exemplifies the Vijayanagara’s architectural excellence. A rectangular building admeasuring around 30 square meters, it has a large sunken bath at its centre. Built-in such a way that no outsiders could enter the bath, this majestic and enormous ancient building sets the clock back and is one of the major places to see in Hampi. Interesting as you may be to find arched corridors all around this Royal bath, the place has a huge courtyard in the front with a dome-shaped roof, balconies with small windows, and a rectangular pool made of bricks in the middle with open blue sky.

Riverside Ruins are a couple of lingas carved on a flat rock surface which is close to a river edge of Kodandarama Temple. An array of about 100 to 1000 Shiv lingas, this place immensely popular among tourists. A little away from this array is the finely-carved sculpture of Lord Vishnu and other Hindu deities.

A number of small shrines, statues, pavilions, and carved artefacts within this cluster of ruins make it a perfect place for photographers and historians. A lot of tiny shrines that are submerged and rock surfaces reflecting carved motifs can be found here. Standing in a row of 108 lingas, a squarish 1008 lingas and can be spotted all across the gorge. If the river is stable, you can head towards this place through a coracle ride. 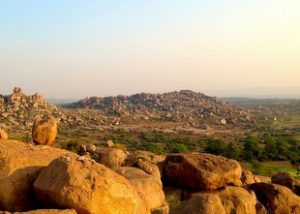 Out of all the places to visit in Hampi, Matanga Hill is the most popular place for trekkers. Represents the highest point of Hampi, it’s a picturesque destination for travel photographers to capture the panoramic view of Hampi. After trekking up the hill for around 30 minutes, you will find Veerabhadra Temple sitting right at the top of Matanga Hill. This temple has a rooftop, which is unarguably the best place to witness the sunrise and sunset over the lovely landscape of this historical Hampi town.

Named after Saint Matanga, the north portion of this hill extends into Tungabhadra river where you can visit Kodanda Rama temple. Towards the south of this hill, there is a twisting valley with a zigzag Turthu canal. The low-lying northern section exhibits a trekking trail that connects straight to Hampi bazaar.

Located in the foothill of Matanga Hill, Hampi Bazaar is one of the popular Hampi sightseeing places. Lined with ruins of pavilions, it is an ancient street stretching over a kilometre.

Also known as Virupaksha Bazaar, Hampi Bazaar once used to have bustling shops, restaurants and residences on both sides of it. The eastern side of the market is occupied by local villagers. At one end of the Hampi Bazaar, you can find a huge Nandi bull with a photo gallery on the other side. The lavish pavilion in front of Nandi bull statue plays host to famous annual Hampi Bazaar. 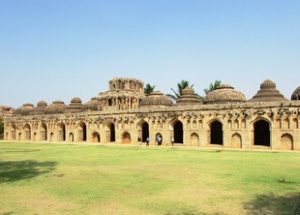 Back in the day, the Elephant Stables served as an enclosure for royal elephants of the Vijayanagara Empire. It is amongst the significant tourist places to visit in Hampi. Once used for the parking of royal elephants, it is a long building homing to a series of dome-shaped chambers. These chambers are around 11 in their total count. The whole building gives a symmetrical appearance, and the central hall tower reflects the shape of most of the temples. This central hall has five domes on either side of it which reflects an Islamic style of architecture.

Established in 1994, Daroji Bear Sanctuary is a protected forest area where you can witness lovely Indian Sloth bears strolling around or climbing up the trees or playing around with each other. You are going to find a lot of Indian Sloth Bears here at this Sanctuary.  Dotted with a lot of boulders, the hillocks here are rough but an ideal place for the 120 sloth bears to live in this sanctuary.

This sanctuary houses leopards, hyenas, jackals, spotted deers and various other species of plants, making it one of the most favourable places to see in Hampi for nature and wildlife lovers. Some other animal species found here are  – Tiger, Leopard, Mongoose, Pangolins, Star Tortoise, and Spotted Deer. This sanctuary also exhibits around 90 bird species, 27 butterfly species, and a watchtower at the centre.

But the trip doesn’t end here. There is so much that Hampi has to offer within its small area. Make sure to visit the 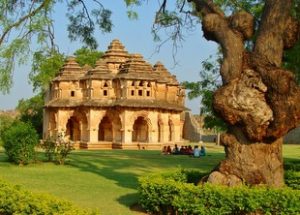 Archaeological Museum of Hampi to witness the various exhibits from different eras. Next, you can choose to visit the vibrant Hippie Island, located across the Tungabhadra River. Within the same parameters, you can visit the Lotus Palace, Zenana Enclosure, King’s Balance, Mahanavami Dibba. If you are feeling religious, then you can opt for a Hampi temple tour which will cover Achyutraya Temple, Hazara Rama Temple, Kadalekalu Ganesh and more.

And not just exploring, but you can also engage in several fun activities. Rock climbing, trekking, bike riding, cliff Jumping and most importantly shopping! And with this, we draw a conclusion that Hampi might be just the next travel destination for you to explore.