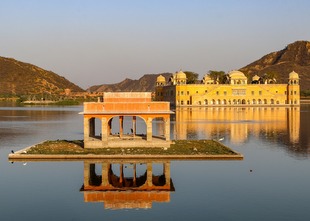 Jaipur, the enchanting city of colours and historical wonders, is full of sparks and thrill. The vividness, the clarity, and the joy that oozes in the city’s air has an exotic feel to it. It is the artists’ paradise with magnificent architecture, heritage, and peacocks! The scorching sun becomes a secondary concern when all you can focus on is the bright colour of the city which we believe is appealing to ages of all kind.

Located at the western side of, Jaipur is the capital of Rajasthan. The Pink City, which is actually the other name of the city, has been popular among the tourists of all ages from several generations. When the Prince of Wales visited Jaipur in the late 19th century, Maharaja Ram Singh painted the entire city pink – the colour that symbolizes hospitality. The tradition continues to this day. Fascinating, right?

And it is for this reason we have come up with Top 12 places in Jaipur that you must visit. So without any further delay, let’s proceed with our list – 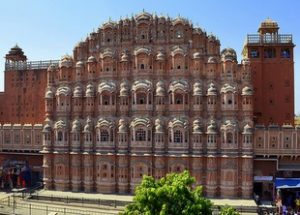 Also known as the Palace of Winds, Hawa Mahal becomes the most important landmarks to visit in Jaipur. Built-in 1798 by Maharaja Sawai Pratap Singh, it is a five-storey extension which closely resembles a honeycomb. This extraordinary building has 953 small windows, called jharokhas which are again decorated with intricate latticework. The most interesting fact about this palace is that on closer observation it would represent the crown of Lord Krishna.

Built-in 1798, Hawa Mahal distinctly shows the unique scientific vision of Maharaja Sawai Pratap Singh. Due to its exemplary construction, the palace was designed in such a way that the insides of the palace remain breezy which is made possible due to the big windows. The palace windows restricted outsiders from being able to stare inside the palace while providing a clear view of the outside.. This is the primary reason why it becomes such a popular summer destination.

Now, if one wishes to enjoy the panoramic view of the entire city of Jaipur, Nahargarh Fort is the perfect landmark for you. Built as a defensive fort on the Aravali Ranges, Nahargarh Fort is a majestic fort overlooking both Amer and Jaipur. Because of the ideal viewpoints, the fort becomes a popular picnic hangout spot for localities.

Built by Jai Singh II, Nahargarh Fort was originally named Sudarshangarh, but the name was later replaced by Nahargarh or the Abode of Tigers. Jai Singh II built this fort in order to tighten the security of the region, and it also served as a shelter camp to British wives during the Sepoy Mutiny of 1857. Interesting fact – the jungles around the fort served as popular hunting grounds for the Maharajas of Jaipur. 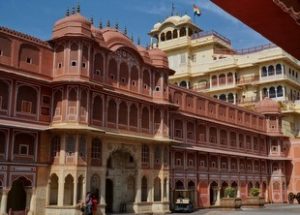 Almost every other person has an inclination to visit this site once they travel to Jaipur. Located in the heart of the Jaipur, City Palace is the most extraordinary monument in the city. Guarded by huge impounding walls, the palace is an amalgamation of Rajput and Mughal architecture. One must visit City Palace to step into the world that was once cherished by the Rajputs.

Constructed during the early 16th century under the supervision of Maharaja Sawai Jai Singh II, the City Palace is all about details, fine artworks and beautiful engravings. Udai Pol, Jaleb Chowk, Tripolia Gate, and Virendra Pol are the entrances to this palace. Adorned with enticing peacock gates, Chandra Mahal show the Hindu Gods through its splendid artworks. Mubarak Mahal is another part of this palace. A large portion of the palace has been turned into museums, of which Maharani Palace and Baggi Khana are the most striking ones. Both of the museums display artefacts of the Royal Families.

Known as the Fort of Victory, Jaigarh Fort houses the world’s largest cannon, Jaivana. Situated on the rugged promontory of the Aravallis, it is one of the most spectacular places to visit in Jaipur. Having been a part of many famous wars, it was the main symbol of the military prowess. Jaigarh Fort is located near Amer and Nahargarh Fort and can be visited en-route.

Built-in the year 1726 by Jai Singh II, Jaigarh Fort was built a defensive fort and was used to house weapons and other artillery. Made up of red sandstones which runs about 3 km, the fort is dominated by watchtowers. The granaries, water reserves and storage system in this fort are the finest examples of science and technology. Some of the best places to visit here are the Ram Harihar Temple, Kal Bhairav Temple, and a museum that showcases primitive arms and ammunitions. 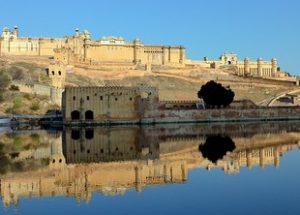 Also known as Amer Fort, it is located in Amer, which is around 11 kilometres from Jaipur. Erected in 1592, Raja Mansingh constructed this fort.. Raja Jai Singh I later expanded the fort. The beguiling beauty of red sandstone and white marble stone reflect a blend of Hindu-Muslim architecture.

With high impounding walls which defended its residents from enemy attacks, the main building of the citadel served its people with all the luxuries and amenities. The panoramic view of sunrise and sunsets along with the exquisite backdrop of the Maota Lake only heighten the beauty of this Fort. The interior of Amber Fort is decorated with wall paintings, frescos and gemstones which only add to its beauty.

The Palace of Mirror, or as colloquially known as Sheesh Mahal, is among the popular halls to visit within Amber Palace. This hall was designed in such a manner that just a ray of sunlight can illuminate the entire hall as it is decorated with numerous pieces of mirror tiles.. Although visiting hours are from 8 AM to 5:30 PM, Amber Fort looks even more beautiful during nights when the entire fort lits up against the dark sky.

Built during the reign of Maharaja Jai Singh II, the astronomical observatory has the largest sundial – Samrat Yantra – in the world. Maharaja Jai Singh II was a man of many interests, of which astronomy was his keen interest which motivated him to construct the country’s largest observatory. The fourteen geometric devices available inside the observatory are used in measuring time, predict eclipses, the arrival of monsoons, observing constellations and orbits around the sun. The astrological instruments attract astronomers and architects from all part of the world. 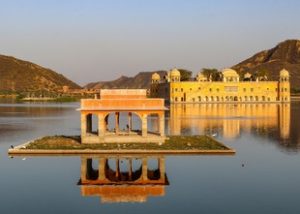 Situated in the middle of Mansagar Lake, Jal Mahal is yet another architectural wonder that Jaipur has to offer. Also known as Water Palace, it is a fusion of Mughal and Rajput styles of architecture. Made up of red sandstone, Jal Mahal is a five-storey building, among which the four storeys remain underwater when the lake is filled.

Traditional boats are used to have access to the palace since it is located in the middle of the lake. The clear water of the lake and the scenic Aravalli mountain range dotting this palace, offer a splendid view of Jal Mahal. The best part about this palace is that it becomes an indigenous home to many colourful migratory birds. Some of the migratory birds found here are Flamingo, Great Crested Grebe, Pintail, Kestrel, Coot and Grey Wagtail. Several species of fish and various other flora and fauna can also be spotted here.

Since we’re talking about the plethora of colours and wonders of Jaipur, one must not forget to visit the variegated markets of Jaipur with assorted fabrics, exotic mouth-watering cuisines and the authentic Rajasthani vibes. Every other corner in these markets speaks of a different story, a different essence. You can choose to take a Walking Tour in Jaipur to visit these four markets –

Johari Bazaar, as the name suggests, is famous for different kinds of precious gemstones. Bapu Bazaar sells the city’s finest textile goods and bags. You must visit Nehru Bazaar to try the intriguing ‘Jootis’ which are available in a multitude of colours and designs. Kishanpole Bazaar is a sanctuary full of wooden sculptures and paintings. Walking through these markets seem much more of an experience than reading it through your screen. Make sure you visit these beautiful bazaars to get the ultimate exotic Pink City to feel.

Beautifying the gates of Old City and flanked by the famous Ram Niwas gardens, Albert Hall Museum is a stunning example of Indo-Saracenic style architecture. Named after the Prince of Wales, the fort was completed in 1887. But with the completion of the palace rose the confusion on the purpose of the Hall. Moreover, the suggestion to open a museum with this Hall was by Dr Thomas Holbein Hendley. Maharaja Sawai Madho Singh II liked this suggestion, and since then the Hall has served its purpose as a museum.

What is interesting about this museum is that not only it collects various artefacts from several countries, it is instrumental in showcasing products by local artists and craftsmen. With every passing century, collections in this museum have increased to a large extent. This museum houses one of the six ‘Egyptian Mummies’ in India. Brgsch Bey of the Museum of Cairo gifted this Mummy as a souvenir.

Another important point to mark important is that – Jaipur is extremely popular for its temple. And this is why we bring you the 3 temples that you must visit while you’re in Jaipur. 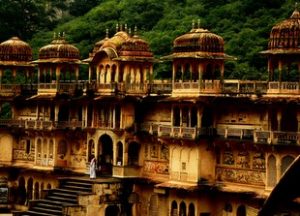 Also known as Galta Monkey Temple, it is a popular Hindu pilgrimage site. Built-in the 18th century by Diwan Rao Kriparam, it is located 10 km away from Jaipur. According to mythology, after Saint Galav completed his 100 years of penance, God blessed this region with an abundance of water. Galtaji has temples dedicated to Lord Ram, Brahma, Surya, Lord Vishnu, Krishna and Hanuman. The sacred shrine of Galataji always remains surrounded by monkeys. Surrounded by hilly ranges filled with vegetation, the temple has seven sacred ‘kunds’. A legend associated with the temple states that this was the place where Tulsidas wrote Ramcharitramanas.

Govind Dev Ji Temple is an important temple of Lord Krishna in Jaipur. According to Hindu legend, the idol is closest to the real appearance of Krishna during his incarnation. The temple remains crowded, especially during Janmashtami and Holi.

Built completely from white marble, this Laxmi-Narayan temple is really popular among tourists. Adorned with beautiful carvings, the inner walls depict various events associated with Hinduism and the outer walls also have cravings of philosophers, thinkers – Socrates, Zarathustra, Christ, Buddha and Confucius. The three huge domes represent three different approaches to religion. At night, the temple brightens more and exhibits its completely glory to the onlookers.

If you have some time to spare, you can always opt for a few additional trips near Jaipur. Of all the places that you can choose to visit, we have narrowed down a few selections for you. Gaitore, Sisodiya Rani Bagh and Chokhi Dhani lie on the outskirts of Jaipur. Wander through the Chand Baori stepwell in Abhaneri. Or visit Sariska National Park, Ranthambore National Park, and Keoladeo National Park. You can even choose to glide along the roads in Ajmer and visit the holy shrine of Khwaja Muin-ud-din Chisti, Akbari Fort & Museum, Taragarh Fort, Happy Valley and more. And don’t forget to see the Brahma Temple in Pushkar which is popular for its famous Camel Fair in November.