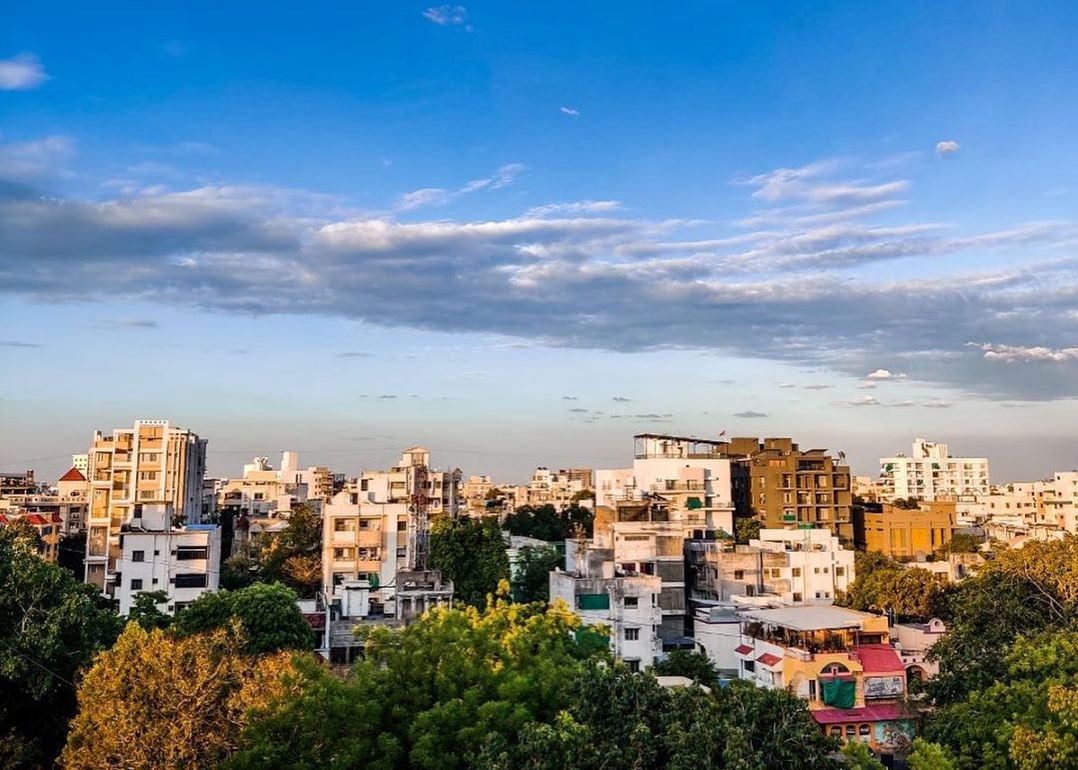 Nagpur is the third-largest city situated in the Indian state of Maharashtra.

In a report proposed by Oxford Economics, the city is projected to be the fifth fastest-growing city in the world between 2019-2035 with an average growth of 8.41%. With its undergoing metro construction and quick technical and industrial developments in progress, Nagpur is soon expected to be a metropolitan city.

Because of its geographical position, the city of Nagpur is famous for its delicious oranges, which are brought from the nearby villages; therefore, acquiring its name – the Orange City.

Being a diverse city, the majority of the population speaks Marathi and Hindi, among several other regional languages.

The earliest names of Nagpur was “Fanindrapura”. It derives its origin from fana or hood of a cobra. Later, B. R. Ambedkar claimed since the river Nag flows through the city, the present city of Nagpur derived its name from the river, and the people living in this region were called “Nag people”. During the British rule, the name of the city was spelt and pronounced as “Nagpore”.

The present city of Nagpur was founded in the year of 1702 by Bakht Buland Shah, a Gond prince of the kingdom of Deogarh in the Chhindwara district. Later, Raghoji Bhonsle of Vidarbha situated himself at Nagpur, after conquering the territories of Deogarh, Chanda and Chattisgarh by 1751.

Following the rule of British Raj, the region was administered by British officials; and with the rise in industrialism, Tata Group was successful in starting the country’s first textile mill at Nagpur.

Sitabuldi Fort, the historical site located in Central Nagpur, had been a witness to the fierce battle of the Battle of Sitabuldi which was fought between the Bhosla forces and the British.

The battle was a turning point as it soon laid foundations of the tragic downfall of the Bhosales and paved the way for the British acquisition of Nagpur city. Following India’s struggle for freedom against the British Raj, the city was marked instrumental in the initiation of Non-Co-operation Movement at the Nagpur session of 1920.

How To Reach Nagpur:

Being a metropolis, the city has easy, accessible routes connecting several major and minor cities –

En route by air: Nagpur is well-connected by daily direct flights to all the metropolis in India. Dr.Babasaheb Ambedkar International Airport is an International airport serving the city of Nagpur, Maharashtra, India. The airport is located at Sonegaon, 8 km South-West of Nagpur.

En route by train: Nagpur Junction remains the most popular Railway station in the city apart from Ajni Railway Station and Itwari Railway Station. It is situated at the junction of Howrah-Mumbai and New Delhi–Chennai main lines.

More than 250 trains stop at this junction; therefore, facilitating the transportation of the public. Furthermore, Nagpur is the only city in India to have diamond railway crossing.

En route by road: Nagpur is easily connected to the nearby villages and towns by roads. It becomes a major junction for roadways as India’s two national highways pass through the city. City buses, rented cars and metros are also available in Nagpur.

Best Places to visit in Nagpur:

Adasa Ganpati Temple, located at a distance of 43 km north-west of Nagpur on Saoner-Kalmeshwar road, is a temple dedicated to Lord Ganesha. The main temple located here is the ancient Adasa Ganesh Temple, which is one of the eight Ashta-Vinayaks in Vidarbha.

The 12 feet tall and 7 feet wide monolithic stone idol of Lord Ganesh, placed inside the temple, is believed to be self-evolved. Besides this temple, there are around 20 small temples within the premises which is spread around an area of 10 hectares of land.

Also known as Dhamma Chakra Stupa, it is a religious monument for Buddhism in India. Deekshabhoomi is the ground where people get ordained as Buddhists.

It is one of the most famous pilgrimage centres for Buddhism in India where B. R. Ambedkar, the Father of the Indian Constitution, embraced Buddhism.

Beside the stupa, there is a Buddha Vihara with a bronze image of Lord Buddha; and beside the Vihara, stands the Bodhi Tree – a holy fig tree.

Today, the sacred center stands as the second-largest stupa in Asia, attracting millions of tourists from all around the globe.

Sitabuldi Fort, the site of the Battle of Sitabuldi in 1817, is located atop a hillock in central Nagpur, Maharashtra, India. The inside of this grandeur fort consists of an elegant palace complex made up of sandstone, granite and laterite stones. The fort was built by Mudhoji II Bhonsle, also known as Appa Sahib Bhosle.

The Raman Science Centre and Raman Planetarium Complex, named after the famous Nobel laureate Chandrasekhara Venkata Raman, is located at Nagpur. It is an interactive science center affiliated with Mumbai’s Nehru Science Centre.

The center is child-friendly, holding science lectures, science film shows, and 3-dimensional science shows. The center was developed to promote a scientific attitude, portray the growth of science and technology and their applications in industry and human welfare, and holds science exhibits.

The 250 year old temple is situated at a place called Tekdi, after which the temple is being named. Even though the place remains jammed with tourists throughout the year, one can experience the populous place in Nagpur during the ten days of Ganeshotsav.

Popularly known as ‘Tedki ke Ganpati’, the temple is said to be one of the Swayambhu or “self-manifested” temples in the city.

Located in the heart of the city, it is the central zoo of Nagpur which is frequently visited by families, children, and visitors. This zoo is maintained by Panjabrao Deshmukh Krishi Vidyapeeth (PKV).

The zoo remains popular among children because of its kid-friendly environment, experiencing fascinating wildlife up close. Animals such as lions, tigers, leopards, deer, peacocks, are among its popular attractions. A garden inside the zoo, known as Maharajbagh, has been converted into a botanical garden with a rich collection of herbs, ornamental and aromatic plants.

Other than the above-cited places, the city is home to several Muslim places of worship, of which Jama Masjid-Mominpura and Bohri Jamatkhana-Itwari remain the most popular.

Apart from this, Nagpur is well known for its food; the distinctive cuisine known as the Varhadi or Saoji cuisine is the main cuisine of the Savji community and remains extremely popular among people for its spicy taste and aroma.

Beverages made out of the city’s recognized oranges are tourist favourites. The Mominpura region remains famous for its biryani and other Mughal delicacies. The famous food joint serving tarri poha has a makeshift arrangement in a footpath beside Kasturchand Park.

Orange City is a hub of street shopping. The city packs in a whole lot of variety in the array of products that it has to offer. One may find the city’s renowned Oranges and its quality products like jams, jellies, marmalades, and fruit squash in the Cotton Market area.

Apart from its great history, oranges, and religious centres, Nagpur is the winter capital of Maharashtra. The city was ranked the 20th cleanest city in India, quickly emerging as the best city for innovation and best practices in Swachh Sarvekshan 2018.

Nagpur is also called the ‘Tiger Capital of India’ since it connects many Tiger Reserves. MIHAN or Multi-modal International Cargo Hub and Airport at Nagpur is an airport project. This project was specifically initiated for Dr. Babasaheb Ambedkar International Airport.

It is the biggest economical development project currently underway; it promises to make Nagpur a better place and facilitate aircraft. Very soon, it is going to be one of the biggest cargo hubs in India.

The MRO facility constructed at Nagpur by Boeing is the only and second such facility in the world after Shanghai. At 89.6%, Nagpur has the best literacy rate among all cities in Maharashtra after Mumbai.
GMC NAGPUR is Asia’s second-biggest medical college. It has the second largest stupa in India after China. Zero Mile Marker, the center point of India, is in Nagpur hence making it India’s geographical center.

Nagpur is considered to be one of the hottest cities in India. Therefore, travelling to Nagpur in summers is not advisable. The best season to visit Nagpur is from October to March. The weather is pleasant with a minimum temperature of about 10 degrees, making it ideal for travellers to experience a satisfying journey.