Rajaji National Park is situated in the state of Uttarakhand, serves as a major attraction for tourists as well as flora and fauna lovers. The park is spread over 820 km2 and over three districts of Uttrakhand- Haridwar, Dehradun, and Pauri Garhwal.

In the year 1983, Rajaji Wildlife Sanctuary of Uttaranchal was merged with Motichur and Chilla wildlife sanctuaries and made into Rajaji National Park. The park has been named after Late Sri C. Rajgopalachari (also known as Rajaji), a famous freedom fighter and first governor-general of India.

How to reach Rajaji National Park

Rajaji National Park is situated along the hills and foothills of Shiwalik ranges in the Himalayan foothills and represents the Shiwalik eco-system.

Ways to reach are by-

Road- this can be the most convenient method but that depends on one’s personal preference. One can navigate via google maps to the park. The Rajaji tiger reserve is 220km from Delhi and 510 km from Lucknow.

Air- one can also reach here by air, the nearest airport is Jolly Grant, Dehradun which is 55km away from the park, which has a daily flight coming in from Delhi

There are three gates in the park:

1. Chilla Tourism Zone, Rajaji– The Chilla Complex provides for eco-friendly bus, safari by the Park Jeep run by the locals, elephant ride and a small Interpretation Center-Cum-Library. The Bus, Jeep, Safari is a 2 and 1/2 hour circuit through a unique landscape passing through Mundal, Mithawali, and Khara.

Enroute one can enjoy the natural beauty of the forest or sight various wild animals including the elephant. A brief half at Mundal and Ghasiram machans provide a good opportunity to look around. Elephant rides are conducted in the morning and evening and need to be booked which are worth spending time with.

2. Motichur Entry Gate, Rajaji–  A 24 km drive through the predominantly Sal forests from the Asarori entry gate through Charring Cross on the Canning Road to the FRH is a memorable experience. The tranquillity of the surrounding forests is often broken by the whistle and the sound of trains.

This often wards off wild animals in the surrounding. A drive from here further on the ‘Naresh Chauhan Road’ towards Satyanarayan FRH is though the best Rajaji National Park. Besides this ‘Bailey Road’ (Name after W.A Baily, DFO, Dehradun, 1925-1928) leading to Motichur FRH also provides an opportunity to see the wilderness. There is also a Motichur forest rest house worth visiting.

3. Ranipur Entry Gate, Rajaji– Ranipur Or BHEL, Ranipur is a town in Haridwar district in the state of Uttarakhand, India. It is the township developed by Public sector Bharat Heavy Electricals Limited (BHEL). It is 26km from the park itself.

A little known marshy grassland just near the Rajaji National Park (extension area of Rajaji Tiger Reserve), near Haridwar. This is a unique 3783.5 hectare (9349.23 acres) site. It is a corridor for most of the animals transferring from National Park. 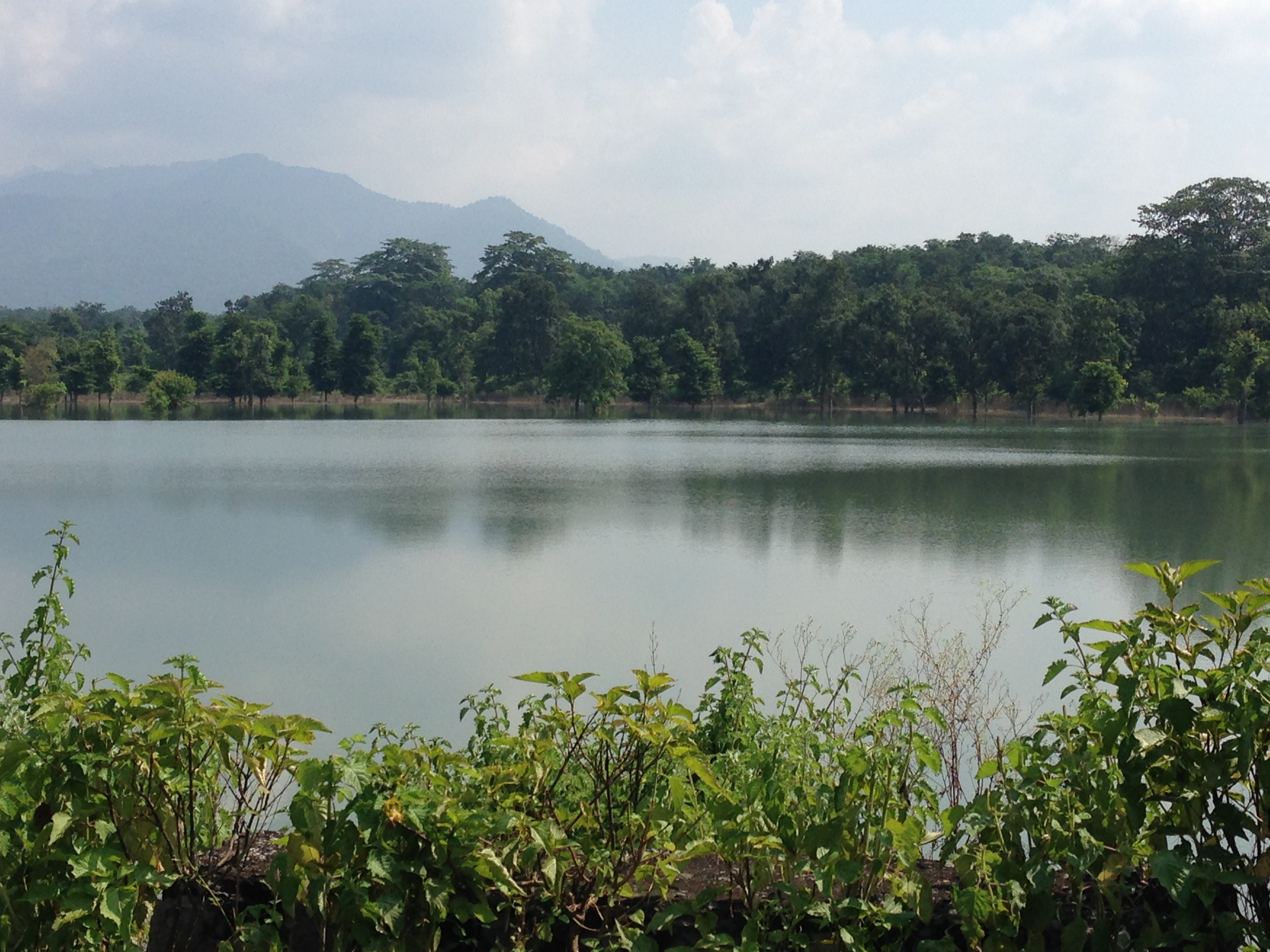 Jhilmil is literally the last piece of primordial Terai marshland to survive untouched in Uttarakhand. A panoramic view from the well-situated watchtower can take one back a millennium and more; little would have changed. At this low-lying site (altitude: 240 m. or 800 ft.) lives Uttarakhand’s only surviving herd of Swamp Deer or Barasingha (Cervus Duvaucelii).

These graceful creatures were once found all over the Terai, the once-unending marshy belt separating the Shivalik Hills and the Gangetic Plains. Jhilmil was declared a Conservation Reserve in 2005 upon an order from Dr. Abdul kalam, then the President of India, thanking a creative new law.

Rajaji tiger reserve is famous for its jungle safari and its tigers, during a Rajaji national park safari one gets to see the diverse flora and fauna and the picturesque beauty of the park, and of course the preserved tigers in the park.

ts important to take permission and tickets from the forest department before entering the premises of the park. Jeep safaris are offered for 3 hrs each time in morning and evening from sunrise to sunset twice every day inside park approximately in open jeeps through rugged terrain on unmetalled treks through “Raus” and over hills giving you the opportunity to see wildlife and birds in different habitats in Mundal, Mithawali, Khara and other ranges of park.

Various resorts are situated around the park for tourists to reside at, these resorts can be found on google and different booking sites.

Junglee Resort & Shoolin Jungle Lodge our favourite picks among them. DM us to get the best offers for your stay.

Birds and other fauna in Rajaji park

Perfect bird watching destination, more than 400  species of endemic and resident birds, passage and migratory birds. The bird diversity in Rajaji National Park is very rich because of located in the Eco-tonal zone and also because of different kinds of habitats present in it.

A list can be found via the link here.

The Park spans over an area of 820sq. Km which includes Rajaji, Motichur and Chilla wildlife sanctuaries, parts of Dehradun, Shiwalik and Lansdowne Forest Divisions. The Holy river the Ganges flows through the National Park for a distance of 24km, besides the innumerable streams and wild brooks making it rich and diverse. It offers ample opportunities to nature lovers to enjoy the captivating landscape and wildlife.

Rajaji is thickly foliated predominantly by the Sal Forest and a number of other forest types which include the Western Gangetic Moist and Northern dry Deciduous and Khair-Sissoo forests. Low Alluvial Savannah Woodlands cover the drier southern margins of the park, in contrast to the Shiwalik Chir-Pine on the high reaches of the hills.

The park is home to the Cheetal, Barking deer, Sambar deer, Wild Boar,  antelopes such as the Nilgai, Goral and of course the Asian elephant for which this park is the Northern and Westernmost boundary protecting it under project elephant.

The primates include the Rhesus Macaque and the Hanuman Langur. The Indian Hare and the Indian Porcupine are among some of the small mammals found in the park.

Reptiles in Rajaji include one of the largest Pythons, King Cobra, Common Krait, Indian Cobra and the Monitor Lizard. The park also houses over four hundred bird species. The Oriental Pied Hornbill, Crested Kingfisher, and Crimson sunbird are some of the residents of our retreat.

This area is the first staging ground after the migratory birds cross over the mighty Himalayas into the Indian subcontinent. Rajaji National Park and the Wild Brook Retreat give you all the excitement and exhilaration of holidaying in the heart of the Indian wildlife.

Just where all the action is. In the lap of Nature at its most raw and where the law of the jungle prevails. Predators prowl the wild pathways, the deer call for help, birds shriek in the skies and reptiles slither across the earth.

The park also protects carnivores such as the Royal Bengal Tiger under project tiger and the Leopard and the lesser carnivores like the Jackal, Hyena, Jungle Cat, Leopard Cat, Civets, Himalayan Yellow-Throated Marten Himalayan Black and Sloth Bears

There are about 315 species of birds that inhabit this park. India’s National bird, Peacock is found here in abundance. The innumerable variety of butterflies and small birds add to the beauty of this place.

A total of 312 birds species has been recorded. Of these, 151 are residents, 87migrants, and 49 are altitudinal migrants, 7 are local migrants, while the status of the remaining 18 is unknown.

For some species, Rajaji forms the western edge of their range, e.g. Great Pied Hornbill Buceros bicornis and Golden – fronted Leafbird Chloropsis aurifrons (Pandey et al. 1995). The Common Green Magpie Cissa chinensis, a denizen of Broadleaf Evergreen and Moist Deciduous forest, has been reported from the forest adjoining Rajaji NP, which links it with Corbett NP.

According to Birdlife International (undated) classification of biomes, Rajaji national park occurs in sino – Himalayan Subtropical Forest(Biome-8). However, it has more species of Biome – 7 (Sino-Himalayan Temperate Forest. A total of 112 species has been identified in Biome – 7, and Rajaji NP has 12 of them, all recorded in winter.

Reptiles seen at the park comprise Monitor Lizard, along with King Cobra, Python and a number of other snakes.

Rajaji National Park of India is nestled between the Shivalik ranges and the Indo-Gangetic plains. Broadleaved deciduous forests, riverine vegetation, scrubland, grasslands and pine forests form the range of flora at these parks. The dense jungles here are home to vivacious wildlife here.

Butterflies and other insects

Due to the flourishing fauna of a lot of insects and butterfly species live here in their natural habitat.

Plan Your Trip With Us…

DM us to know the best offers available for you, our trusted partners will make sure you ll have a memorable stay.

No votes so far! Be the first to rate this post.

We are sorry that this post was not useful for you!

Abhishek, popularly known to the world as Himalayan Gypsy is an award-winning travel & street photographer based in India. He is an adventure freak and a digital nomad who likes to document India, its culture, heritage & architecture through his pictures and writes about his experiences on his blog. A banker by profession and a traveler by heart, he has been exploring India since his childhood during family vacations and school picnics which gradually turned into solo trips and guided tours. Today his work is known to the world through his numerous pictures published, featured, and exhibited in various popular magazines like DiscoverIndia, Natgeo Traveller India, Asian Photography Magazine, Chiiz Magazine, Nikon India, Wildlife India, etc.

Best Places To Visit In Udaipur: Seen and Unseen Gems of 2020

Best Places To Visit In Udaipur: Seen and Unseen Gems of 2020