Srinagar: The Land of Beautiful Gardens

The city of Srinagar is famous for several things, amongst which the regal Mughal Gardens deserve a special mention. Established during the Mughal era, these royal gardens are exemplary of fine landscaping and intricate architecture blended with the ethereal beauty of nature.

There are three such beautiful gardens in the city, which depict the inclination of erstwhile Mughal emperors towards nature and greenery.

Inspired by the lavishly laid gardens of Persia, these Mughal Gardens mesmerise visitors with their scenic charm.

Shalimar Bagh is a royal Mughal Garden that lies along the right bank of Dal Lake in Srinagar. Spread across a total area of 31 acres, it is the largest among the three Mughal Gardens in the city.

The name of this garden means ‘abode of love’, which is supported by the fact that it was built by Emperor Jahangir for his loving wife Nur Jahan.

Laid in 1619, this garden was originally named Farah Baksh that means delightful on translation.

The architecture and landscaping of this garden draw inspiration from the Persian Chahar Bagh. It is segregated into three terraced portions, each serving a different purpose.

The outer portion of the garden is named Diwan-i-Aam that was open to public, whereas the central portion named Diwan-i-Khas was exclusively for the emperor.

Its uppermost portion was designed for women belonging to the royal family. The garden is encompassed by tall trees of chinar and is dotted with colourful flowers. A beautiful canal with polished pebbles runs through the centre of this garden and adds to its beauty.

The highlights of Shalimar Bagh are chini khanas, which are delicately designed arched niches placed behind waterfalls.

During olden times, these chini khanas were lighted with oil lamps that created a stunning effect. In present times, these niches are adorned with flower pots that create an attractive visual effect. From May to October – the peak tourist season – a light and sound show is organised here during the evening.

Indira Gandhi Memorial Tulip Garden is one of the recent additions to the multitude of tourist attractions in Srinagar. It was established in 2006-07, by covering a sprawling area of 29.6 acres that made it the largest tulip garden across the continent of Asia.

This seemingly endless green patch of land is dotted with about 20 lakh flowers, which include several varieties of tulips.

The eye-soothing verdure and blossoming tulips lend immense scenic beauty to this garden. What adds to the charm of this garden is its picturesque backdrop that includes the majestic Zabarwan and the beautiful Dal Lake.

Tulip Festival is organised at this site in March, April every year when tulip flowers are in their full bloom. This popular event is hosted by the floriculture department of the state government. During this flower festival, several cultural programmes, as well as exhibitions of local handicrafts and cuisine, are organised.

Next in the list of these man-made landscaped marvels is the Nishat Bagh, which was built in 1633 by Nur Jahan’s brother Asif Khan.

It is known for the 12 terraced formations, which represent different zodiac signs of astrology. The rectangular pool in the middle of this garden was formed by changing the course of a mountain stream.

Nishat Bagh, situated on the eastern shore of the enchanting Dal Lake, is a beautiful terraced garden with the Zabarwan ranges as its scenic backdrop.

Covering an area of 46 acres, it is Kashmir’s second-largest Mughal Garden, next to the Shalimar Bagh situated nearby. Its name translates to ‘garden of joy’, which is justified by its enthralling natural beauty.

The garden was built in 1633 under the patronage of Asif Khan – the elder brother of Mughal empress Nur Jahan.

Its structure consists of 12 terraces, which represent an equal number of zodiac signs. Tall chinar trees and colourful flowers adorn the lush green landscape of this garden that also has several beautiful fountains. There is a rectangular pool in its centre that has been formed by bringing down a mountain spring from a 15-feet high slide.

Zabarwan mountain range and overlooks the picturesque Dal Lake.
This well-manicured garden covers an area of 80 hectares, of which 17 hectares is occupied by a beautiful lake. It was established in 1969, to spread awareness about various varieties of flora and beautify the city.
There are four main divisions of this sprawling green space, namely Plant Introduction Centre, Research Section, Recreational Garden, and Botanical Garden.
More than 300 species of flora dot the landscape of this garden, including trees of willow and cedar. Visitors coming to this place can relax in its serene surroundings or enjoy the paddle-boat ride on the lake.

Chashme Shahi Garden, meaning ‘The Royal Spring’, is situated at the foothills of Zabarwan Mountains in Srinagar. Covering an area that is 108 metres in length and 38 metres in width, this garden is the smallest amongst the three Mughal Gardens in the city.

Shah Jahan – the Mughal emperor – got this garden laid under his supervision in 1632.

It has several natural springs discovered by a revered female saint Rupa Bhawani,

who was also known as Sahibi. In her honour, the garden was initially named as Chashme Sahibi.

The highlight of Chashme Shahi Garden is its natural spring of fresh water, which has mineral content. There are three terraced formations in the garden,

which are carpeted with lush greenery and dotted with colourful flowers.

Several fountains and waterfalls adorn the verdant landscape of this garden.

It is lined with numerous trees of Chinar and different fruits, which add to its picturesque charm.

Believed to have been built during the 14th century, Badamwari Garden is a piece of heaven tucked away in Srinagar.

Sprawling over the hills of Koh-e-Maran, the enchanting garden is replete with vibrantly blooming bushes and shrubbery.

It houses a magnificent dome at the centre and has trails carved for tourists to walk on.

The early bloom of flowers on Almond trees in the sprawling historic Badamwari garden in Shahr-e-Khaas, Srinagar, has become a source of attraction for nature lovers and tourists, alike.

Situated on the foothills of Koh-e-Maran, Srinagar, the 300 kanals garden was dotted with trees, flowers and cascades provide a soothing experience to the visitors.

Historians maintain there was no record to suggest who laid the garden, but they say it existed even before the rule of Sultan Zain-ul-Abidin in the 14th century.

A well-covered dome in the garden is named after an Afghan ruler, Warris Shah.

The bloom on the Almond trees heralded the spring,

the garden was revived and formally open for public in 2008. 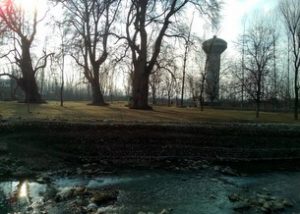 Dal Lake includes 3 islands, 2 of which are marked with beautiful Chinar trees.

The island located on the Bod Dal is known as Roph Lank (Silver Island) and is marked with the presence of majestic Chinar trees at the four corners thus known as Char-Chinari (Four Chinars).

The second Chinar Island, known as Sone Lank (Gold Island), is located on the Lokut Dal and overlooks the holy shrine of Hazratbal.

A canal, beautifully bordered with Chinar trees and blossoming flower beds, starting from a lake just behind the garden, flows through the middle of the garden.

The major draw of the Harwan garden is its natural loveliness and charm.

With greenery in the backdrop of snowy environment,

this garden has big green grass lawns and attracts visitors virtually towards this place.

Reachable by taxis within half an hour, a garden is a perfect place for picnics and excursions also an ideal place for nature walks. It is the gateway to DachiGam Wildlife sanctuary.

Naseem Bagh is a sprawling garden, situated along the western banks of Dal Lake in Srinagar.

Emperor Akbar, regarded as the greatest ruler of the Mughal dynasty, established this garden.

it was laid in 1586, and is considered the oldest Mughal Garden in the region. The garden presents a wonderful melange of natural beauty and human creativity.

Trails of chinar trees adorn the verdant landscape of this garden and add to its charm.

Camping is allowed within the premises of the Naseem Bagh,

which attracts several visitors who want to spend quality time at this peaceful location.

Srinagar is home to some of the most beautiful Mughal Gardens in India.

Besides being perfect representations of Persian influenced Mughal architecture in its prime,

Mughal Garden Srinagar are known for their exceptional beauty owing to their spectacular mountainous natural settings which remain unparalleled in all of India.