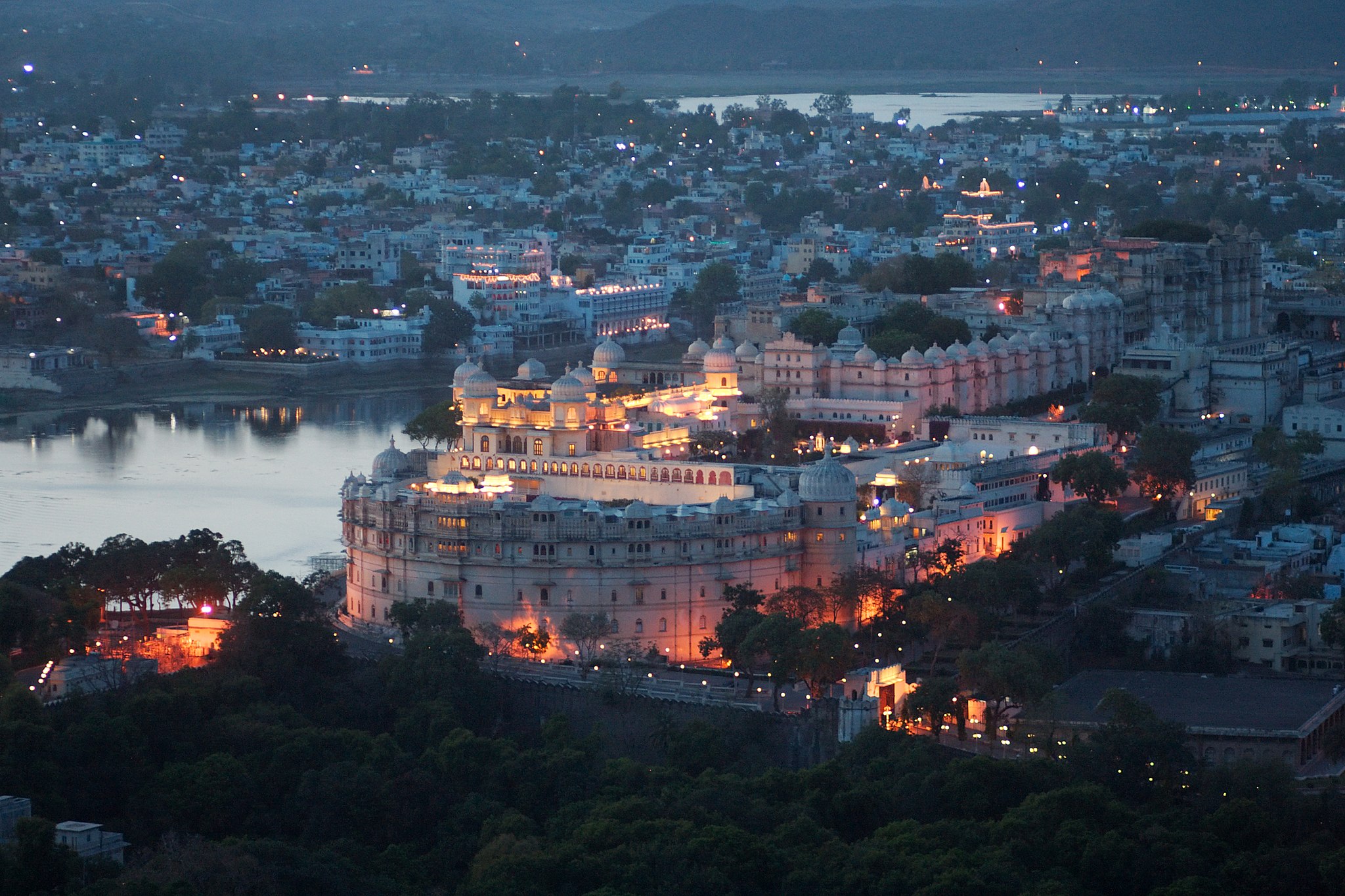 Udaipur is a place, where love for water and undeniable love for ancient History meet. If you are looking for Bunny and Naina, this is the city you need to come to. It is a royal city founded in 1559 and proudly remains the crown of Rajasthan. Visit this beautiful city today and fulfil your dreams of falling in love yet again. 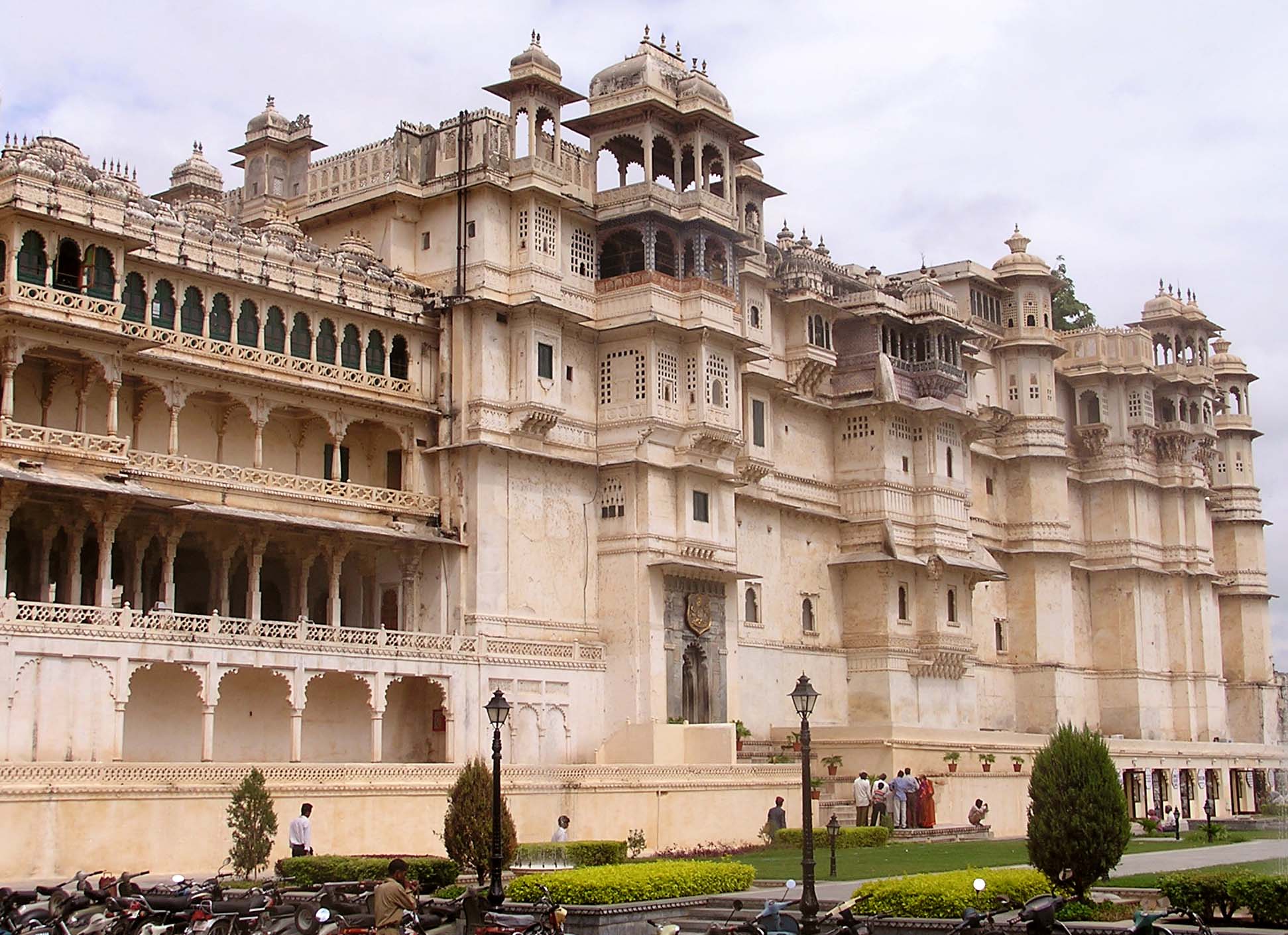 Udaipur, formerly the capital of the Mewar Kingdom, is a city in the western Indian state of Rajasthan. Founded by Maharana Udai Singh II in 1559, it’s set around a series of artificial lakes and is known for its lavish royal residences.

Udaipur offers a variety of rides to hop on to view the city. From horsebacks, cars to rickshaws this place has got your travel covered easily. It is also famous for its Marble Mosaics which is a natural charm to this place apart from its photogenic Havelis and Crooked roads.

Udaipur city has a hot semi-arid climate. The three main seasons, summer, monsoon and winter respectively, dominate the city of Udaipur. Being located in the desert lands of Rajasthan, the climate and weather of Udaipur are usually hot.

The major contributions to the city’s economy come from tourism, agriculture and mineral industries. The handicraft and cottage industry sectors play an important part in contributing to the growing economy.

How To Reach Udaipur?

This mode of transport is the quickest whether from Delhi or the North East. Udaipur has its airport which is quite convenient – Maharana Pratap Airport. The Travel Time from Delhi to Udaipur is about 1 Hr By flight.

The travel time from Delhi to Udaipur takes 11 hours which is the longest and time-consuming.

Wondering how to go Udaipur from Delhi? Several trains run from Delhi (NDLS and Hazrat Nizamuddin) to Udaipur with some of the most common being Chetak Express and Mewar Superfast Express. It should take you around 12 to 16 hours to cover Delhi to Udaipur distance by train. 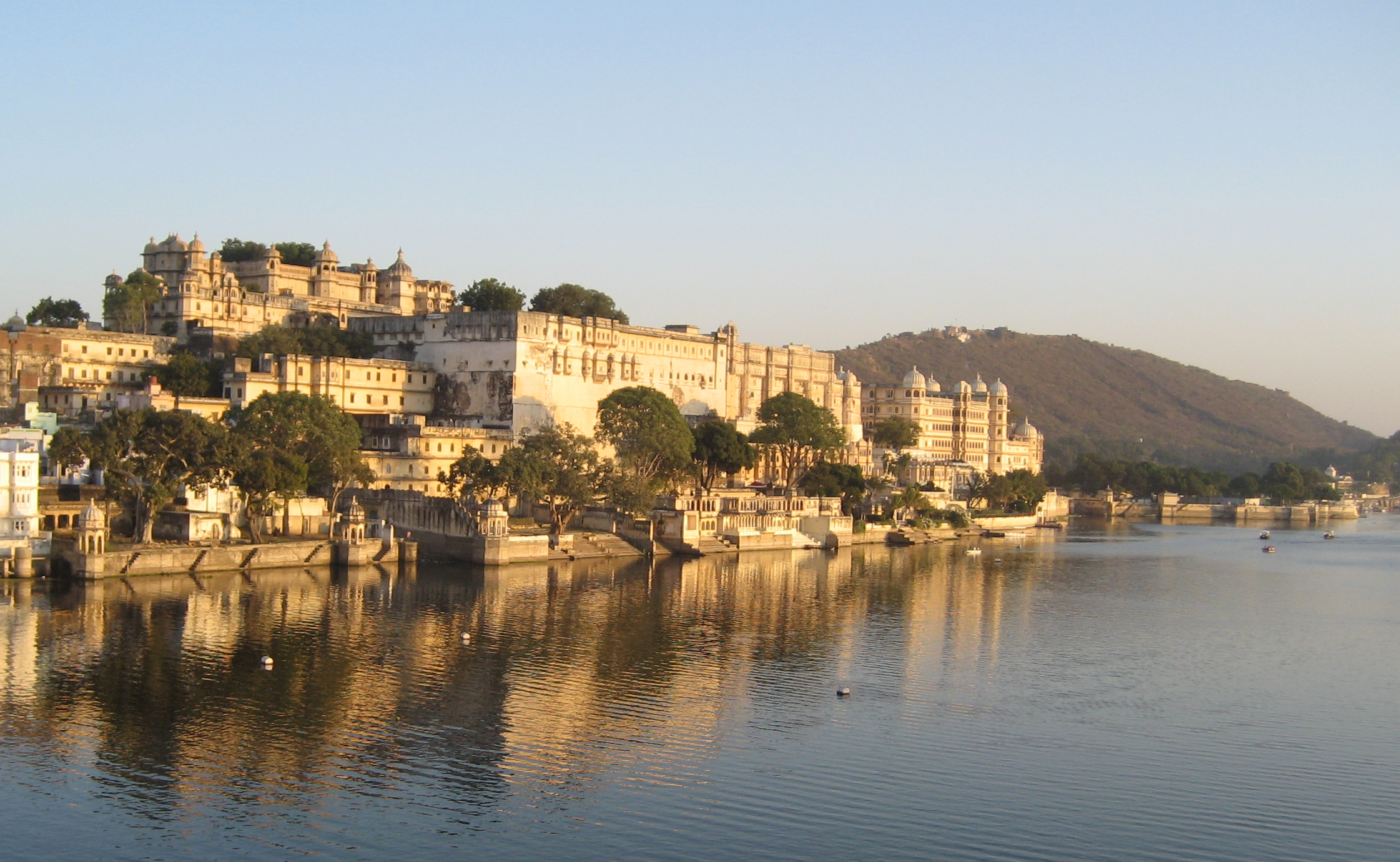 Lake Pichola, an artificial freshwater lake that was created in 1362 is one of the main attractions in Udaipur. This lake is surrounded by hills, palaces, temples, worth a thousand words. This is the perfect place for an Instagram picture, 1 km from the city centre.

This is one of the largest palace complexes in the whole of Rajasthan with its extensive interiors and magnificent intricacies located on the Banks of Lake Pichola. It was built over nearly 400 years, with contributions from several rulers of the Mewar Dynasty.

Fateh Sagar Lake, placed in the city of Udaipur in Rajasthan, is an artificial lake named after Maharana Fateh Singh of Udaipur and Mewar and built to the north-west of Udaipur, located to the north of Lake Pichola in the 1680s, is one of the four lakes of the Udaipur city.

This artificial lake has 3 islands in the middle out of which 2 are parks. Nehru Park is one of the parks and has a boat-shaped restaurant too.

This Palace is built with white marble located on top of the Bansadara Peak, overlooking Fateh Sagar Lake. One should book entry tickets in advance as it is crowded.

Almost 22km away from Udaipur, Eklingji Temple is dedicated to Lord Shiva. Taking a cab to this temple is the most convenient way to reach it. Its brilliant architecture and peaceful surroundings attract plenty of tourists every year.

This is a perfect spot for Car lovers with its exquisite collections of royal cars over the years. Vintage and Classic Car Museum is home to 20 antique cars, which includes four classic Rolls-Royce, one MG-TC convertible, two 1939 Cadillacs, one Ford-A Convertible, one 1936 Vauxhall-12, rare models of Mercedes and some of the solar operated rickshaws and many other vehicles.

Jaisamand Lake is the second-largest artificial lake in Asia. There are seven islands in the lake, one of which is still inhabited by a local tribe, also it has a temple dedicated to Lord Shiva on the dam.

It includes 11 islands and a boat ride is advisable those whoever wish to take a look at this entire lake which is rich in Marine Life and thrives with its biodiversity.

Jag Mandir is a palace built on an island in the Lake Pichola. It is also called the “Lake Garden Palace”. This palace offers the most beautiful sunset while you dine at a lip-smacking restaurant called ‘DARIKHANA’.

This palace is built with white marble and yellow sandstone and is a three-story construction. 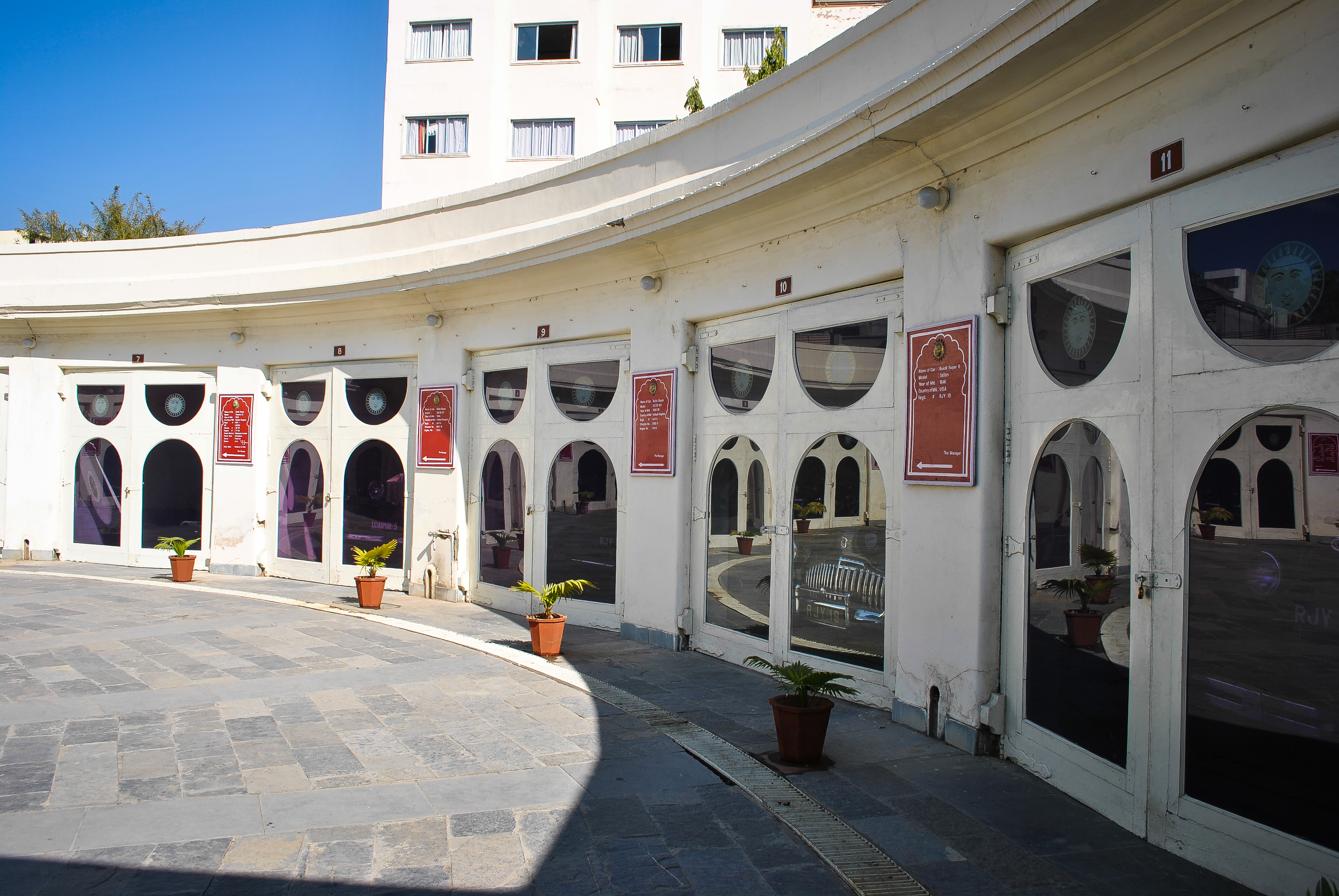 Bada Mahal is an exquisite architectural palace built on an 89 ft. high rock. This palace has the most intricate designs which unique and manages to attract a huge number of tourists. This mahal is located 22 km from the city centre.

Fun Things To Do On Your Udaipur Trip

Mewar Spring Festival – Mewar festival is observed to welcome the arrival of the spring season with all zest and dedication in Udaipur, Rajasthan which takes place between March and April. During the days of the festival, the whole city of Udaipur gets drenched in colours of festivity.

Local markets and shops beautify their frontage with bright lights and decorations. This bright and colourful festival attracts tourists from all over to join its charming ceremony of tradition.

It is a fair famous for handicrafts in the form of clothes and accessories situated 3 km away from the city of Udaipur. Shilpgram is an ethnographic museum that depicts the lifestyles of the folk and tribal people of the region.

Tired of shopping and sightseeing? Saheliyon-ki-Bari is a major garden and a popular tourist space also known as ‘Garden of the Maidens’ the best place to relax your head and float your head inits ever so mesmerising architecture.

It lies in the northern part of the city and has fountains and kiosks, a lotus pool and marble elephants. It was built by Rana Sangram Singh. There is also a small museum here. This place is located on the banks of Fateh Sagar

The best time to visit Udaipur is the winter season. The temperature remains comfortable and is apt for visiting the monuments and other places of interest in Udaipur. The best months to visit are September, October, November, December, February and March.

Ans: Udaipur is a tourist destination and is known for its history, culture, scenic locations and the Rajput-era palaces. It is popularly known as the “City of Lakes” because of its sophisticated lake system.

Ans: You should plan for a minimum of 2 Nights & 3 Days at Udaipur.

Ans: You can check out these popular spots to book your stay:

1.The Oberoi Udaivilas – Hospitality And Architecture, A Class Apart

3.The Leela Palace – Brilliance And Precision

Ans: Distance between Jaipur to Udaipur

Ans: The traditional dress of Rajasthani men is Angarakha (an upper garment) and dhoti or Payjama (a lower garment) for men. For women, Kurti or top and a Ghaghra (skirt) make their dress, yet it is not compulsory to wear the conventional dresses of Rajasthan.