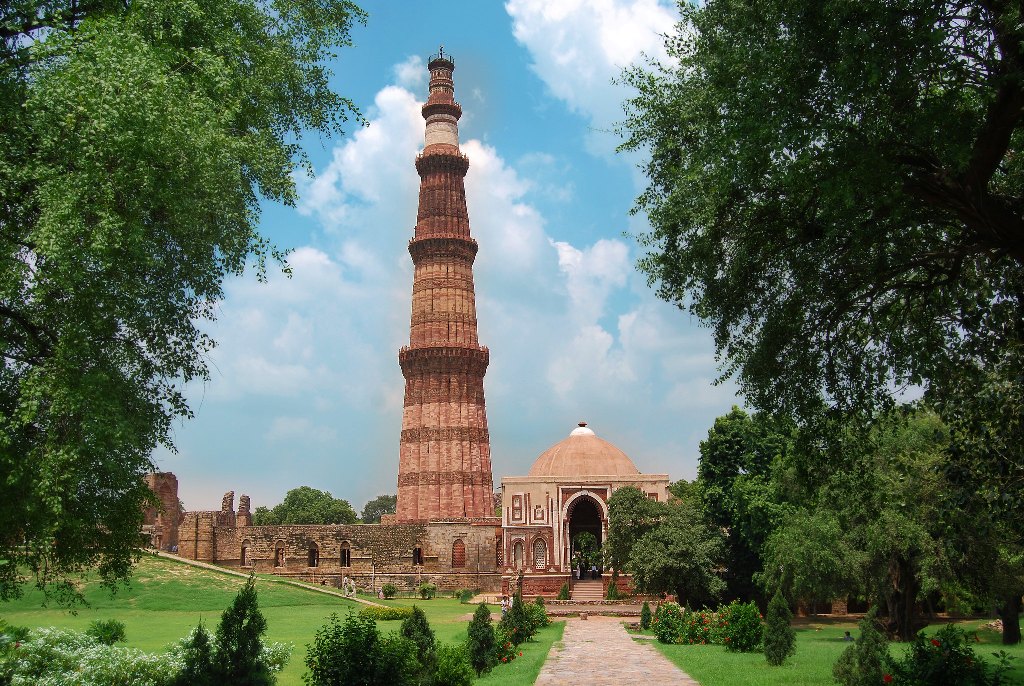 Qutub Minar was built in the 13th century, the magnificent Tower stands in the capital, Delhi. The tower of victory with a height of 72.5m built-in 1193 by Qtuab-ub-din Aibak.

This tower has a 14.32m diameter at the base and about 2.75m on the top. It is recognized as one of the UNESCO World Heritage sites in 1993. This five-storied structure with projecting balconies is the symbol of Muslim dominance in Delhi.

Around the Qutb are important buildings like Iltutmish’sTomb(1235), the magnificent Alai Darwaza (1310), and Alauddin’s Madrasa (1317) built by later sultans such as Iltutmish and Alauddin Khalji.

It was founded that Qutab-ud-din Aibak, the first Muslim ruler of Delhi, commenced the construction of the Qutab Minar but the only basement was constructed, later Iltutmush added three more storeys, and in 1368 and finally Firoz Shah Tughlak constructed the fifth and the last storey.

Its is truly an architectural marvel of ancient India.

How To Reach Qutub Minar?

By Rail: Qutub Minar is connected by a New Delhi Railway station at 17km and is 55 minutes away.

By Air: Nearest airport to Qutub Minar is Indira Gandhi International Airport at a distance 13.8km and will take 32 minutes to reach by road.

Places To Visit At Qutub Minar: 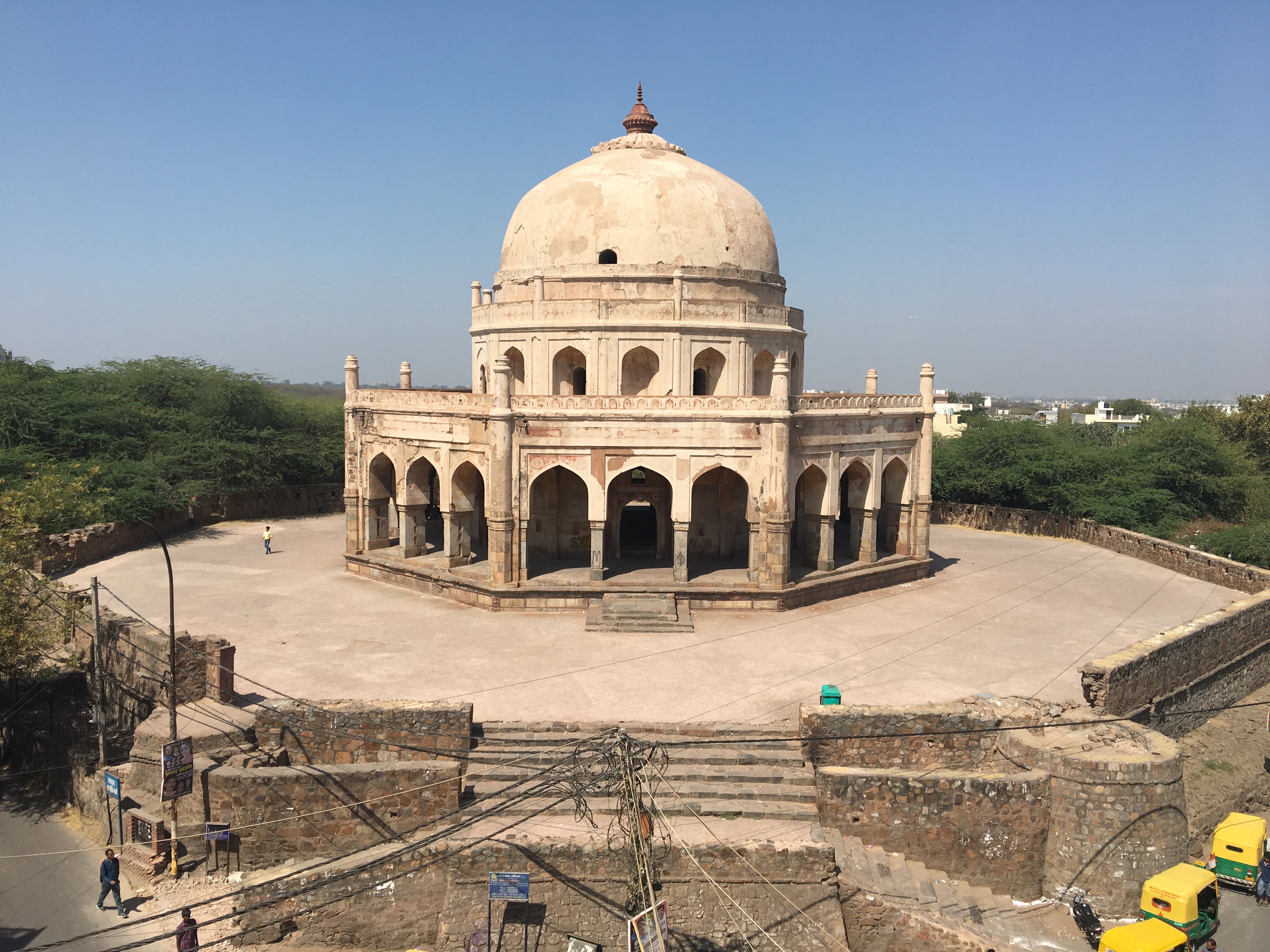 This 16th century Tomb of Adham Khan which is located on the way between Qutub Minar and Humayun’s Tomb. It is also known as Bhool Bhulaiyaa of Delhi.

This is the last structure built by Mughals.

It is also known as Laal Mahal or Rang Mahal which was started by Akhbar Shah II. It consists of majestic Hathi gate, Moti Masjid, Kaki Dargah etc.

This place is also known for Phoolwaalon ki Sair festival which was started by Bakhtiyar Kaki.

The Ship Palace built between the years 1453 and 1525. This excellent monument is called ship place because of the placement of it near a lake known as Hauz-i-Shamsi.

It is also known as Sarai because it provides accommodation facilities to the pilgrims and travellers. The reason behind the construction of this monument is that to create a comfortable summer resort for royal Mughals.

This place consists of two monuments one is the Mosque and the other one is a tomb. Its construction began in 1528 and took one year to complete. The place gets this name as Jamali was a famous Sufi saint and Kamali was an unknown person who is associated with Jamali.

Thus, the Tomb and mosque named together ‘Jamali Kamali’ since they are buried next to each other.

This beautiful water reservoir located in Mehrauli. It was constructed in 1230 by Shamsu’d-Din Iltutmish.

The famous Moorish traveller Ibn-Batua was struck by the immensity of this tank, which was supplied by rainwater and in the centre of which stood a double-storeyed stone pavilion, reached only by boats when full.

The Iron Pillar now seen at Qutub Complexes was originally erected during the time of King Chandra. It is famous for its non-rusting composition and has a structure of 23 feet 7 inches high with 16 inches diameter.

This structure is a masterpiece of Indo-Muslim art. It is also one of the oldest mosques in India.

Its oldest portions were built using pillars from temples which were built by the Rajputs. This Mosque was founded by the first sultan of the Slave Dynasty, Qutbuddin Aibak.

It was located in Qutub Complexes near the Alai Darwaza. It is the Tomb of Imam Zamin, a noted Turkestani Imam, who is also the Imam of Quwwat-ul-Islam Mosque. He was buried here in 1538.

The tomb is a small sandstone structure with white plaster and Jaali work.

The walls of Darwaza are ornamented with beautiful carvings of floral and geometric patterns.

Things To Do At Qutub Minar:

There are many adventurous and interesting things to do in Delhi. One of the most favourite activity among people is to explore Delhi’s local market for shopping.

Khan Market, Sarojini Nagar Market, Lajpat Nagar and Janpath Lane these all are the most visited markets in Delhi.

There are many restaurants in the area which can be tried out by foody. One of the most famous places for food in Delhi is Chandni Chowk.

Photography: This place is great for photo enthusiast because it consists lot many places such Qutub Minar itself then Iron Pillar, Quwwat Ul Mosque which can be photographed beautifully.

Its is one of the best locations to be visited by history buffs and travellers yearning to learn more about the history of the region. It perfectly inculcates a lot of history and beauty into a single location, which increases our perspective.

This stone minaret is one of the tallest stone minarets in the world with its height of 72.5m and has 14.32m diameter at the base and about 2.75m on the top.

Iron Pillar was seen at Qutub Complexes and is still standing pillar without rusting over 2000years ago.

This magnificent Tower is surrounded by great historical monuments and together it named as ‘Qutub Complexes’. The complexes include places such as Iron Pillar, Alai Minar, the Tomb of Imam Zamin, Major Smith’s Cupola and Sanderson’s Sundial, Quwwat-ul-Islam Mosque.

On 4 December 1981, 45 persons were killed in a stampede due to electricity failure that plunged the tower’s staircase into darkness. Since then, people are not allowed inside the tower.

The top floor of the minar is distinguishable from other floors because it was made of white marble. It was also destructed by lighting and Firoz Shah Tughlaq who rebuilt it.

It was the first Indian monument to have an E-ticket facility.

The Qutub Minar has gradually developed a tilt of approximately 25 inches southwest.

The walls of Qutub Minar are carved from the verses from the holy Quran and it also has Arabic and Na Gori characters inscribed on it.

Ala-ud-din Khilji also aimed to build a second tower like the Qutub Minar. At the time of his death, the tower had reached 27 metres and after his death, no one continued his overambitious project. Ala’i Minar, the incomplete tower, stands to the north of the Qutub Minar and the mosque.

The design of Mini Qutub Minar in West Delhi’s Hastsal village and Chand Minar in Daulatabad were inspired by this tower.

Qutb Minar has a Decorative Light Show every evening. The Qutb Minar Festival in October/November shows the cultural art forms of the country with a backdrop of this exquisite minaret.

Since Delhi experiences really hot summers, it would be recommended if the place is visited from November to March months.

The best time to walk around the grounds would be during the evenings but the complex does get crowded during the day.

Hence, those who arrive early in the morning will get relative peace as well as a beautiful scene of Qutub Minar.

Q1. Where Qutub Minar is situated?

Q2. What is the ticket price of Qutub Minar?

Ans2. The ticket price of Qutub Minar in 2020 for Indian tourist is Rs35 and for foreigners is Rs 550. Ticket price for children below 15 years is free. Additional Qutub by Minar charges is Rs 25 for video camera use.

Q3. What are Qutub Minar timings?

Ans3. It is open on all days of the week and the opening time and closing time of Qutub Minar is from 7 am- 5 pm. The visitors must carry their identity cards to purchase the ticket and enter the monument.

Q4. Is Qutub Minar is open at night?

Ans4.Yes, Qutub Minar is open at night time as an initiative taken by the government to promote night tourism. The timings of Qutub Minar at night is 7 pm-11 pm.

Q5.Where did Qutub Minar get its name?

Let us help you get the best out of your holidays and a hassle-free trip.

Tell us more about your travel plans and we certainly offer you something of your choice & budget.