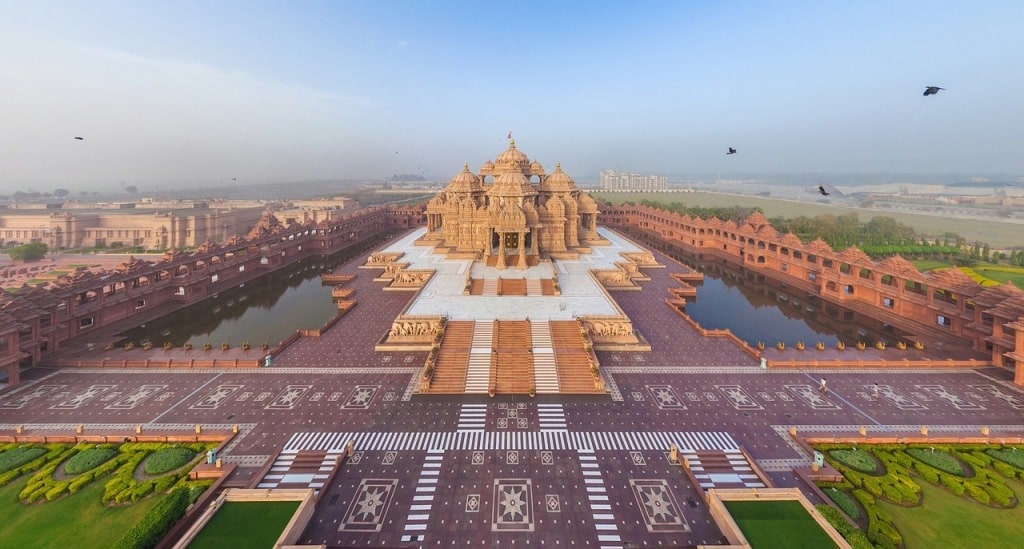 Akshardham means the divine abode of God. It is considered as an eternal place of devotion, purity and peace.

The Swaminarayan Akshardham in New Delhi is a Mandir which is an abode of God, a Hindu house of worship, and a spiritual and cultural campus dedicated to devotion; learning and harmony.

The spiritual messages; vibrant devotional traditions & the ancient architecture all are echoed in its art and architecture.

The mandir is a humble tribute to Bhagwan Swaminarayan (1781- 1830), the avatars, devas and great sages of Hinduism.

The great complex was inaugurated on the 6th of November 2005 with the blessings of HH Pramukh Swami Maharaj and through the efforts of skilled artisans and volunteers.

How To Reach The Akshardham Temple?

‘Swagatam’– Welcome! Inside the campus, one will be greeted by the Welcome Gates followed by Bhakti Dwar. Passing through a Visitors’ Center, you can stop by to seek assistance from a volunteer to plan your visit or get a printed guidebook.

One can enjoy the intricate carvings of Mayur Dwar and make a wish at Charanarvind – Holy Footprints.

You can offer your prayers to the deities in Garbhagruh and get blessed by the Mandapams – carved ceilings. On the first level, stroll outside through the Narayan Peeth – the bronze relief work.

On the outside walls at the ground level, walk with elephants and experience their stories in Gajendra Peeth

Participate in a prayer for peace and fulfilment of your wishes. Be part of a spiritual ritual and offer holy water to Neelkanth – the teenage-yogi form of Bhagwan Swaminarayan.

Sahaj Anand is a breathtaking spiritual multimedia water show.  The colourful lasers, video projects, underwater flames, water jets and surround sound in symphony with lights and live actors produce a captivating and inspiring presentation of an important story from the Kena Upanishad.

A visit to Swaminarayan Akshardham’s two thematic gardens is a conversation with nature, history and culture. One can learn about inspiring children, men and women from Indian history at the Bharat Upvan. Imbibe the wisdom of great minds from around the world at the Yogihriday Kamal.

Things To Do In Akshardham:

2. Akshardham Temple is surrounded by Narayan Sarovar, a lake wich carries water from 151 lakes in India. There are 108 faces of cows placed along the lakes representing 108 Hindu deities.

It consists of a 3000-feet-long orbital path for Parikrama made up of red stones from Rajasthan. It also has a two-storey building, which has  1,152 pillars and 145 windows.

This Parikrama is spread around the temple like a beautiful garland

3. There is an exquisite garden in the Akshardham temple complex in the shape of a lotus and therefore is also,        known as the Lotus Garden.

From above, it looks like a Lotus which is made up of large stones and has quotes from Shakespeare, Martin Luther, Swami Vivekananda and other eminent figures.

4. Another interesting fact about Akshardham temple is that there are 10 gates, representing the 10 directions according to Vedic literature. These gates mean that goodness will continue to come in from all the directions.

5. In the complex, there is a Yagnapurush Kund which is the largest yagna kund in the world. It consists of 108 small shrines and 2870 steps leading to the kund.

The great temple has achieved a place in the Guinness Book of World Records. Akshardham Temple was marked as The Largest Comprehensive Hindu temple in the World by the International Organization.

6. In the premises of the Akshardham temple, there are green lawns which are collectively known as Garden of India or Bharat Upavan.

These lawns have bronze statues of the great and epic personalities of India. These personalities are not divine figures but real-life heroes.

7. The temple has an eleven feet high beautiful statue of Lakshmi Narayan and other statues of Shiva Parvati, Radha Krishna and Sita Ram within the memorial.

It consists of a theatre within the premises, which is known as Nilkantha and reflects the events from the life of God Swaminarayan.

8. The centre of attraction for the audiences is the mesmerising musical fountain show of the temple which is known as the Circle of Life, a great 15-minute spectacle held every evening. It show reflects the cycle of life, from birth to death.

9. ‘Sanskritik Vihar’ is a boat ride used by visitors to watch ancient India’s culture and history. It displays the universities, markets and civilization of ancient India.

10. Akshardham Temple looks beautiful at night. It receives around a lakh visitors a week and around 850 volunteers work here daily.

The best season to go to the temple is winter season, which begins in October and finishes in February.

It is better to visit the temple in the late afternoon, as you will have enough time to explore all the attractions and be at the musical fountain right in time for the show.

2. What are the opening days of Akshardham temple?
Akshardham Temple is open every week, from Tuesday to Sunday. Akshardham Delhi closing day is Monday. It is open from 9.30 AM to 6.30 PM.

3. Which God is worshipped in Akshardham temple?
The word Akshardham means the abode of Swaminarayan and believed by followers as a temporal home of God on earth.

The temple has an eleven feet high beautiful statue of Lakshmi Narayan and other statues of Shiva Parvati, Radha Krishna and Sita Ram within the memorial.

There is a theatre within the premises, which is known as Nilkantha which reflects the events from the life of God Swaminarayan.

Other Famous Swaminarayan Temples In India: